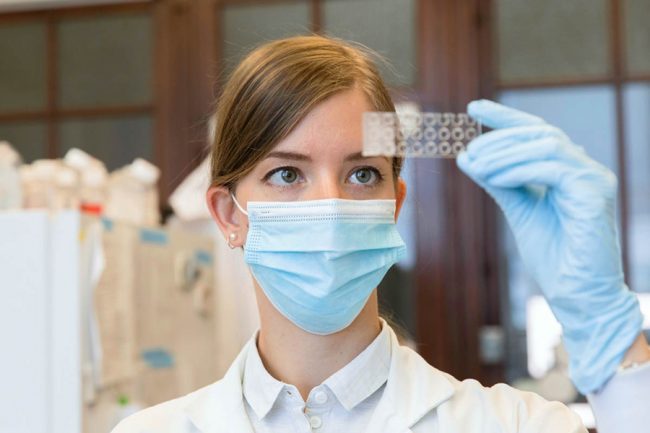 For Anastasia Korolj (ChemE 1T5, PhD 2T1), a love of innovation and discovery was born in a farmer’s field in rural Serbia.

“I was raised in Toronto, but I was born in Serbia and spent my summers visiting relatives in a farm town near Novi Sad,” she says. “I was exposed to animals and plants, tractors, motors, and tinkering with odd scraps and tools while inventing games to play outside.”

Today Korolj is still tinkering, but with much smaller and more complex building blocks. In the lab of Professor Milica Radisic (BME, ChemE) she designs 3D structures for growing kidney cells outside the body. Her research accomplishments have led to her being named to the list of 2021 Schmidt Science Fellows, the only fellow from a Canadian institution in this year’s cohort.

Korolj says she chose U of T Engineering for undergraduate studies because of its track record of excellence.

“I wanted to learn with other motivated students and have access to powerful opportunities that would enable me to do cutting-edge research,” she says.

She quickly made the world into her classroom. After her second year, she did summer research in wastewater treatment at Lund University in Sweden. The following year, she headed to Antwerp, Belgium to complete a year-long paid internship at imaging company Agfa, through U of T Engineering’s Professional Experience Year Co-op Program.

She then spent a further two months in Hong Kong, researching liquid crystals at the Hong Kong University of Science and Technology.

After completing her bachelor’s degree in 2015, Korolj entered directly into the PhD program at U of T’s Department of Chemical Engineering, in collaboration with the Institute of Biomedical Engineering.

Radisic’s group was already well-known for its leading-edge research into strategies for growing heart cells outside the body. But Korolj wanted to go in a new direction: kidney cells.

“Kidney diseases are mysterious and difficult to treat and manage,” she says. “The need for model tissues to do advanced kidney research is huge, but at the time I started, kidney tissue engineering as a field was less evolved than the cardiac field.”

For her thesis, Korolj designed intricate 3D structures made of biocompatible polymers that serve as scaffolds for growing kidney cells and tissues in the lab.

The cells grown in her devices much more closely resemble those in the body than cells grown in petri dishes using current methods. As such, they provide valuable models for studying kidney diseases, as well as early-stage testing of potential new therapeutic approaches.

“Using my kidney tissues in the lab, I was able to detect certain types of injury that the standard tissue culture approaches could not,” she says.

Korolj says she’s very excited and grateful to be awarded a Schmidt Science Fellowship. Nominated by their home institutions, this year’s 28 Fellows represent 13 nationalities with research fields ranging from chemistry to computer science. The award comes with a stipend of US $100,000 per year for up to two years, to be applied toward postdoctoral studies at an institution of the recipient’s choice.

“This level of intellectual freedom at this stage in my career is a true privilege, and I am super motivated to make the most of it,” says Korolj.

“I would like to expand my research internationally by pursuing a collaborative project that applies more mathematical modeling to engineered tissues. I hope to discover some new strategies for early disease detection and treatment.”

“I knew as soon as she joined our lab that Anastasia would be a creative and determined researcher who would push us in new directions,” says Radisic. “Before she joined the lab, we did not work with kidney cells, but she spearheaded her own project evaluating the use of fractal topographical cues on hierarchical assembly of podocyte structures. She also demonstrated numerous times that she is able to organize and lead a group of colleagues in various lab activities.”

“Anastasia’s journey — from Serbia to Canada to Sweden, Belgium and Hong Kong — is a perfect example of how our students bring the world to us, and how we bring the world to them,” says Christopher Yip, Dean of U of T Engineering. “All of us in Engineering are proud of Anastasia’s accomplishments excited for what lies ahead as she launches into this next exciting chapter of her career”

Korolj shares the sentiment about the power of the communities she has been part of to spark new ideas, new collaborations and new ventures.

“Innovation thrives when people of diverse and unique backgrounds come together to support, inspire and contribute to each other’s work,” she says. “Together, we bring the best ideas to life.”