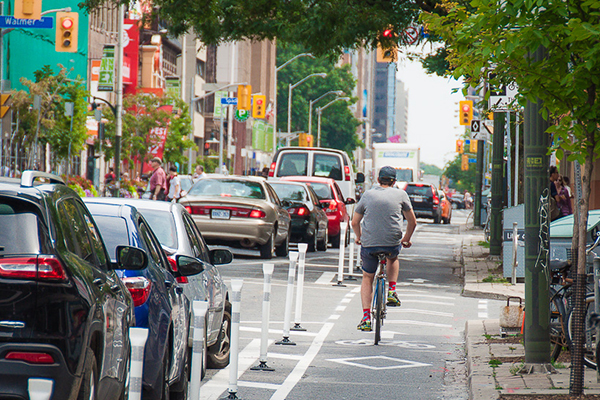 Bike lanes on Bloor Street: U of T Engineering partners with Miovision, City of Toronto to help evaluate pilot and track traffic safety

After just five months of bike lanes on Bloor Street, a new partnership between U of T Engineering researchers, a Kitchener-based traffic analytics company and the City of Toronto will evaluate the success of the project and how it has improved safety on one of Toronto’s busiest traffic corridors.

Miovision is the traffic analytics company which, along with city, is providing video data to a group of researchers from the University of Toronto Transportation Research Institute at the Faculty of Applied Science & Engineering. The researchers will be comparing road safety on Bloor Street from before and after bike lanes were installed.

“We were interested in Miovision’s expertise because they are working on a technique for looking at video data and finding out the trajectories of vehicles, pedestrians and cyclists, and how they’re moving through space,” says Matthew Roorda, a professor in the Department of Civil Engineering and Canada Research Chair in Freight Transportation and Logistics.

“We look for instances where a car has to slow down because a bicycle veered in front of it, a pedestrian crosses into the path of a bicyclist, or one bicyclist or car passes by another at very close spacing. We’re trying to identify in an automated way all of these dangerous situations that don’t necessarily result in an accident but are indications of possible safety problems.”

Roorda’s team will be focusing on “conflicts,” or near-collisions.

The Bloor Street bike lanes project is a pilot. City staff will be reporting on the results of the evaluation in fall 2017.

“The research being conducted through these partnerships represent important steps toward smart cities,” Miovision CEO Kurtis McBride said in a statement. “They combine new data sources and new analytical techniques that will eventually become core pieces of city operations and planning.”

Nancy Hui (CivE MASc candidate) is taking the lead on the safety analysis. She says the real-world application of the work she’s doing is invaluable.

“I know the Bloor Street cycling project is very controversial even among the people who live on Bloor Street, and it’s added motivation for me to know that I’m looking at real people on the street, real cyclists who find themselves in dangerous situations many times a day,” she says.

She will soon begin looking at the before and after data but hopes the new Bloor Street bike lanes have had a real impact on safety.

Both Roorda and Hui see a wider application for the kind of conflict analysis taking place for Bloor Street.

“I hope this technology will one day be available for more people so that it will be easier for them to collect information about the safety impact different projects have on the streets,” says Hui.

Roorda says conflict analysis will help cities evaluate the impact to safety of any changes to a streetscape.

“We’re trying to really put the science behind these changes and do a rigorous evaluation,” he says.