Can Plants Teach Us How to Build Better Solar Cells? 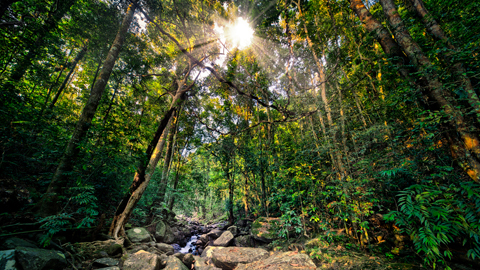 What can we learn from plants about making the best use of the sun’s abundant energy?

That’s the question underlying an ambitious new research project that has won $1 million in the 2012–13 Connaught Global Challenge funding competition.

On one side of the project are the fields of photobiology and quantum biology. Photobiology is about studying the interaction of light with living organisms like plants. Quantum biology investigates the nanoscale physics of the natural world.

“Scientists, including leaders at U of T, have been advancing our understanding of how biology works, in particular how solar energy is harvested by plants and algae,” says Sargent. “It’s been a breakthrough area, and U of T has played a leadership role.”

The other side of the project is the development of technologies — like solar cells — to harvest the sun’s energy. U of T has also been a leader in this field. Sargent himself is known for his innovative work in creating colloidal semiconductors — solar cells that can be painted onto a surface.

The Connaught Global Challenge will bring together these two broad areas of inquiry. Sargent hopes that learning more about how plants capture light and transfer energy at the molecular level, and about and how quantum effects at these scales account for nature’s effectiveness and robustness in energy capture, will inspire the group as it seeks to create the next generation of low-cost, high-efficiency solar cells and lighting technology.

“The amount of solar energy reaching the earth in an hour is enough to meet the world’s energy needs for a year. It’s an incredibly abundant source, and nature has figured out how to harvest it efficiently, cost-effectively and robustly,” he says.

Humans, so far, lag behind nature. “We can make low-cost solar cells, but they’re not very efficient. We can make them more efficient, but then they get expensive. Breaking this compromise is the crux of next-generation solar research.”

In addition to solar cells, the group is focusing on low-cost lighting technology, because in the developed world, lighting accounts for 20 per cent of electrical demand.

“There are a few things that are just amazing about plants,” says Sargent. “One is the antenna effect.” Plants, he says, have a lot of light-absorbing molecules, mainly chlorophyll. Yet the reaction that turns this light into stored chemical energy only happens in a few places in the plant.

“How does the energy get from these many light absorbers to a few reaction centres? It’s through a finely tuned and regulated energy funnelling process. Nature has figured out, through the course of evolution, how to build incredibly efficient funnels. This is an idea that we could apply to making better solar cells.”

The Connaught Global Challenge funding will allow the investigators to come together with students and post-doctoral fellows who are emerging leaders in different subfields of the project. A distinguished visitor component of the program will bring Sir Richard Friend of the University of Cambridge to campus. Friend is world-renowned for his work on the physics and engineering of carbon-based semiconductors. A symposium component will bring together leaders from the clean-tech community and serve as a catalyst for partnerships between academics and research-oriented companies in Canada.

The project, says Sargent, involves both basic and applied research. The group is constantly thinking about “how to translate insights from basic research into practical technologies that can be commercialized.”

The Global Challenge is the marquee program of U of T’s Connaught Fund. Created from the 1972 sale of Connaught Laboratories, which first mass-produced U of T’s Nobel award-winning discovery of insulin, the fund invests close to $4 million annually in emerging and established scholars at U of T.

“The idea behind the Connaught Global Challenge,” says Professor Paul Young (CivE), U of T’s vice-president (research and innovation) and chair of the Connaught Committee, “is to allow our researchers to focus intensively on a major challenge of the 21st century. This project has truly transformative potential. The co-investigators are thinking creatively about how to approach the problem of sustainable energy, and I look forward to seeing what emerges from their collaboration.”

The inaugural Connaught Global Challenge award, given in 2010-11, led to the establishment of the Fraser Mustard Institute for Human Development. Today the institute is conducting groundbreaking interdisciplinary research on how fetal and early life experiences influence lifelong health and learning.

Sargent hopes the 2013 project will jumpstart the creation of a “U of T school.”
“We have a chance to lead globally. We have all the ingredients. It’s a question of bringing them together, which is what the Connaught Global Challenge will enable us to do.”

“This is a huge societal opportunity,” says Sargent. “Sustainable energy solutions are one of the most critical environmental and economical needs facing our society today. We need to solve this problem.”