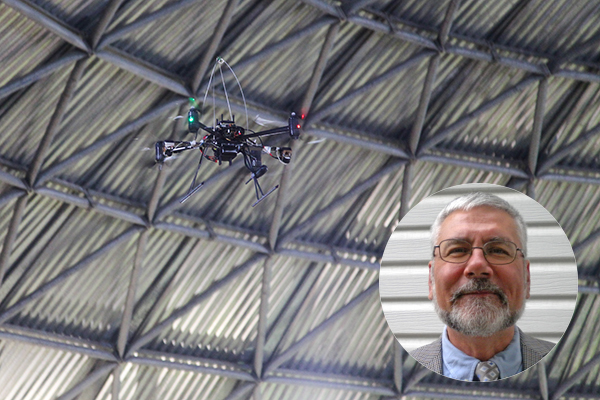 On July 1, 2016, Professor Chris Damaren begins his appointment as director of the University of Toronto Institute for Aerospace Studies (UTIAS). A three-time graduate of U of T Engineering and past vice dean, graduate studies for the Faculty, Damaren sat down with Engineering Strategic Communications to share a few of his top priorities for the Institute, and his hopes and goals for the next five years.

What motivated you to take on the UTIAS directorship?

To me, academic administration is interesting. I’ve found there are two kids of professors: those who run as fast as they possibly can when you mention the word ‘administration,’ and those who have a strange interest in it — these are often people who don’t mind filling out income tax forms! I’m the latter type of person. I had been the vice dean, graduate studies for five years and really enjoyed that, and it was great to work with Dean Amon. And now to have the chance to lead a group like the Institute is very exciting. I have a long history here: I’m an EngSci graduate, Aerospace option, and I did my master’s and PhD at the Institute, so it’s a wonderful opportunity to contribute.

What are some of your top priorities?

Right now I think the Institute is in a very good place. We’re widely recognized as the top aero program in Canada, among the best in North America, and the main challenge initially is to keep that up — to maintain that position.

In terms of changes, one thing that I noticed when I was spending a lot of time on the St. George campus as vice dean, graduate studies for the Faculty, is that UTIAS misses out on a lot of opportunities for collaboration. I think we have a lot to offer, and we have to find new ways to foster new partnerships with our colleagues in Engineering, and the sciences as well. That will be a key priority — to improve interdisciplinary collaborations between UTIAS and the St. George campus. Robotics is a very obvious example of a field where that makes sense.

Do you anticipate the next five years will bring great changes to the aerospace field?

Historically, aerospace has had moments of fast-paced change. If you think of space in the 1960s, everything was new and large, well-funded programs like the Apollo missions really drove things. And commercial aircraft as well: a lot of what we think of as how planes look emerged then. I think right now a lot of the technology is relatively mature, but there are forces driving the research agenda that will ultimately lead to some fast changes again.

On the space side, getting to Mars is going to be huge. My research is on solar sails, so I think getting the technology in place to launch ships powered by solar radiation pressure could lead to fast-paced changes. And aircraft researchers, after several decades of pretty standard configurations for aircraft, are now starting to look at really different kinds of designs, like blended wing bodies, which look like a giant flying wing and the people sit inside the wings. They represents a really nice design problem because you have conflicting principles, aerodynamics and structures, which fight with one another. So there are frontiers for rapid change on several fronts in aerospace right now.

What will the next five years look like for UTIAS?

Five years from now we might not be in this location! There are rumblings of forming a larger ‘aerospace hub’ at Downsview, which might mean a possible relocation. This ‘hub’ could include Centennial College, Ryerson University, we would be geographically closer to Bombardier, MDA may be interested — so we’d have all the key players within close proximity to one another, and that would be very exciting. There many variables, it’s a very complex situation. Relocating some of the facilities is a bit of a challenge. Maintaining and updating our unique facilities and infrastructure is another priority that I’m giving serious consideration.

What excites you most about this role?

As director, one of my primary focuses is expanding our Master of Engineering program. I’m a big fan of the MEng, and I think if you’re going to educate graduate-level engineering students you really need to cover all the bases. Our PhD and MASc programs are important, certainly, but training students for careers in industry is an important thing as well. I would like UTIAS to design some new courses that better address the interests and issues currently facing industry.

Finally, one of the really exciting aspects of the directorship is the faculty demographic we currently have at the Institute — we now have a good mixture of younger and more seasoned faculty members. Watching new folks launch their research programs, which is happening at an enormous clip at the moment, and seeing that come together is pretty exciting.

This interview has been condensed and edited.