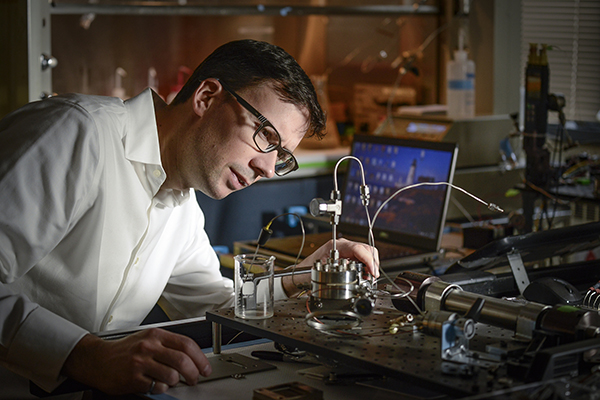 November 20, 2017
Professor David Sinton (MIE) has been elected a Fellow of the American Association for the Advancement of Science (AAAS). (Photo: NSERC)
Sustainability

Professor David Sinton of the Department of Mechanical & Industrial Engineering has been elected a fellow of the American Association for the Advancement of Science (AAAS), the world’s largest general scientific society. This honour recognizes his “distinguished contributions to the field of mechanical engineering, particularly in developing microfluidic methods for applications in energy and the environment.”

Fluids play a major role in global energy and its associated environmental implications. Sinton and his team have shown that microfluidics —a set of tools and techniques aimed at controlling and manipulating fluids on the sub-millimetre scale — has much to contribute in this important field. His contributions address three main areas. The first is using microfluidics to screen optimal growing conditions for algae, photosynthetic organisms that can accumulate oil or other valuable bioproducts within their cells. The second is analyzing the properties and interactions of chemical additives, surfactants, solvents, industrial CO2 streams and crude oil to improve the economic and environmental performance of current oil and gas operations. Finally, Sinton and his team are researching the capture and storage of CO2, including its use in resource extraction, as well as the environmental impact of elevated CO2 levels combined with local environmental stressors.

The impact of Sinton’s research is reflected in his many awards and accolades. In 2013 he received the University of Toronto’s McLean Award. In 2015 he was awarded an E.W.R. Steacie Memorial Fellowship from the Natural Sciences and Research Council of Canada – given to only six researchers nationwide per year. In 2015 he was inducted into the Royal Society of Canada College of New Scholars, Artists and Scientists. Sinton has also been elected a fellow of the American Society of Mechanical Engineers, the Canadian Society for Mechanical Engineering, and the Engineering Institute of Canada.  In 2016 he co-founded the start-up company Interface Fluidics Ltd. to commercialize microfluidic screening technology that improves the economic and environmental performance of current energy operations.

“Professor David Sinton’s groundbreaking research in microfluidics for energy is providing us with innovative new tools for solving some of our most pressing energy-related challenges,” said Dean Cristina Amon. “On behalf of our Faculty, heartfelt congratulations on this richly-deserved recognition.”

Sinton joins 395 other AAAS members from around the world being inducted as Fellows in the latest round in recognition of their efforts toward advancing science applications that are deemed scientifically or socially distinguished. The honour will be officially bestowed February 17, 2018 at the AAAS Annual Meeting in Austin, Texas.