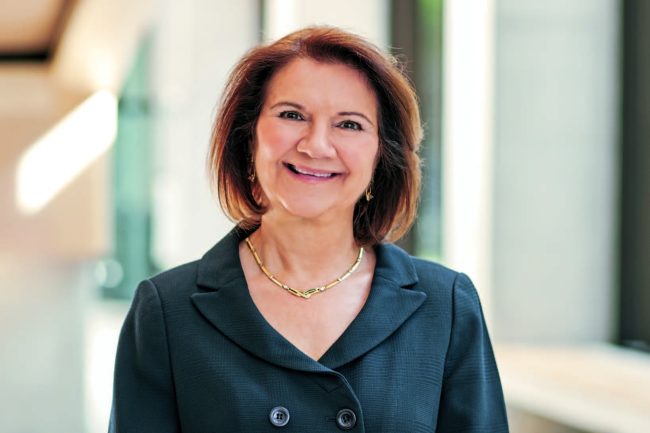 June 3, 2022
Cristina Amon (MIE) is widely recognized as a visionary leader, a champion for diversity in engineering programs and across the profession, as well as a pioneering researcher. Under her leadership, U of T Engineering became Canada’s top ranked engineering school and one of the best in the world. (Photo: Daniel Ehrenworth)

Cristina Amon (MIE), Dean Emerita of U of T Engineering, has been appointed to the rank of University Professor. This is the University of Toronto’s highest and most distinguished academic rank, recognizing unusual scholarly achievement and preeminence in a particular field of knowledge. The number of such appointments is limited to two percent of the University’s tenured faculty.

Cristina Amon is Alumni Distinguished Professor in Mechanical & Industrial Engineering. Her responsibilities as Dean (2006 – 2019) included the strategic and visionary leadership of more than 750 faculty and staff, and 8,000 students. Under her leadership, U of T Engineering has become Canada’s top ranked engineering school and a global hub for multidisciplinary research, education, and innovation, known for its strategic Faculty-wide initiatives, cross-Faculty centres and institutes, and innovative undergraduate and graduate programming. Her commitment to outreach, diversity and inclusion has set a new standard for engineering schools worldwide. During her term, the number of women faculty members at U of T Engineering almost tripled and the Faculty celebrated an historic 40% women first-year undergraduate enrolment for three consecutive years.

Prior to joining U of T in 2006, Amon was the Raymond J. Lane Distinguished Professor and Director of the Institute for Complex Engineered Systems at Carnegie Mellon University. She has pioneered the field of Computational Fluid Dynamics and the development of multidisciplinary multi-scale hierarchical modelling, concurrent design and optimization methodologies for thermo-fluid transport phenomena, with applications to thermal management of electronics and electric vehicles, renewable energy, and biomedical devices.

Amon was appointed to the Order of Canada and inducted into the Canadian Academy of Engineering, Hispanic Engineer Hall of Fame, Royal Society of Canada, Spanish Royal Academy and U.S. National Academy of Engineering (NAE). She is a fellow of all major professional societies in her field and has contributed over 400 refereed articles to the education and research literature. Among her many accolades, she received the Ontario Professional Engineers Gold Medal, Engineering Institute of Canada Sir John Kennedy Medal, and the Engineers Canada Gold Medal, for outstanding public service, technical excellence and professional leadership. She was recognized as one of Canada’s Most Influential Women and a YWCA Woman of Distinction, and received the Engineers Canada Award for the Support of Women.

Active in executive boards and professional societies, Amon has served as director and adviser on boards in North America and abroad, including independent director of MKS Instruments Inc. She was chair of the National Council of Deans of Engineering and Applied Science research committee and founding chair of the Global Engineering Deans Council, and has served on advisory boards for several institutions, including MIT, NAE, Stanford, UBC, UCLA, and Waterloo, and foundations for science, engineering, and technology in Canada and around the world.