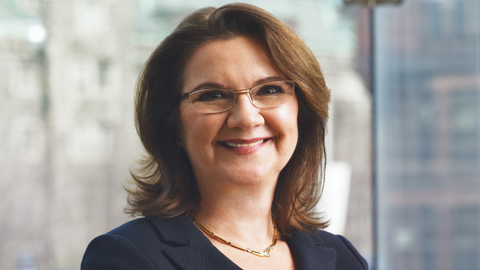 The Society of Women Engineers (SWE) announced today that Professor Cristina Amon, Dean of the University of Toronto’s Faculty of Applied Science & Engineering, has received the 2011 SWE Achievement Award, the highest award given by the Society, for her outstanding contributions to the field of engineering over more than 20 years.

“Dr. Amon is widely recognized for her work in fluid mechanics and heat transfer, as well as for her leadership in engineering education,” says Melissa Tata, SWE president. “Her significant discoveries have advanced engineering science immensely, particularly in a broad range of manufacturing processes, and her groundbreaking research and education positively impacts her community, both in the industry and in the university.”

Prior to joining U of T in 2006 as Dean and Alumni Chair Professor in Mechanical and Industrial Engineering, Dean Amon was the Raymond J. Lane Distinguished Professor of Mechanical and Biomedical Engineering and Director of the Institute for Complex Engineered Systems at Carnegie Mellon University. Her research has advanced the engineering foundation of heat transfer enhancement by flow destabilization, nano-scale thermal transport in semi-conductors, and hemodynamics mass transport in biological systems, including aortic aneurysms and intravenous blood oxygenators. She has made pioneering contributions to concurrent thermal designs, innovation in electronics cooling and transient thermal management of wearable computers.

Among her many awards and honours, Dean Amon has been recognized by SWE as their Distinguished Engineering Educator and Professor of the Year. She is a Senior Member of SWE and served as President of the SWE Pittsburgh section in 2004-2005. Cristina Amon created and led the development of the summer SWE workshop ‘Engineering Your Future’ for 8th-12th grade female and minority students. This workshop has been offered annually since 1993 by the SWE Carnegie Mellon chapter, with the objective of encouraging girls and underrepresented minorities to pursue careers in engineering. At the U of T, Dean Amon promotes women in engineering through a number of outreach initiatives, including Skule™ Sisters, Go Eng Girl, and Women Empowered in Engineering.

Dean Amon has also been recognized as an outstanding role-model for female engineers. She was the recipient of the 2010 Award for the Support of Women by Engineers Canada and the 2011 YWCA Toronto Woman of Distinction award. She been previously recognized by SWE as their Distinguished Engineering Educator and Professor of the Year.

Dean Amon earned her Engineering diploma from Simón Bolívar University and her MSc and ScD degrees from MIT. She has served on external advisory boards at several educational institutions, including Stanford University, UCLA, UIUC, University of Michigan and University of Pennsylvania.

“Cristina Amon, in addition to groundbreaking research contributions, has served the University of Toronto and its Faculty of Applied Science & Engineering with the greatest distinction,” said Cheryl Misak, U of T’s Vice-President and Provost. “She is a brilliant role model for and champion of women in engineering.”

Dean Amon was honoured at the Society of Women Engineers’ Achievement Awards Banquet in Chicago on October 14, 2011.