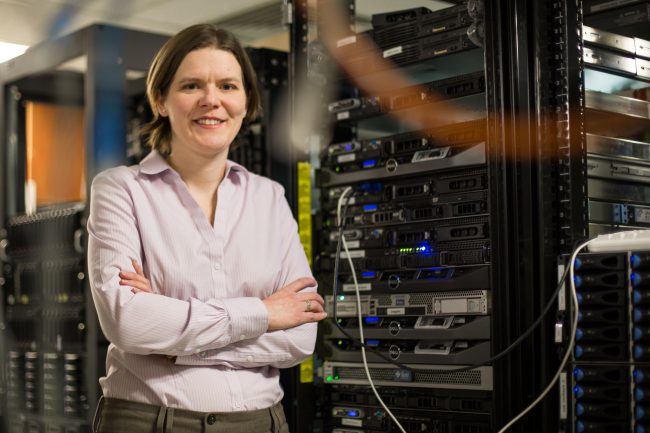 Two things we know: computers keep getting faster and smaller. Why? In large part because we continue to cram more processor cores on a single chip—but making all those processors talk to each other has become a key impediment to future progress.

Professor Natalie Enright Jerger (ECE) is discovering more efficient ways for on-chip networks to communicate, by tackling three challenges: improving communication between cores, caches and memory; streamlining caching protocols; and making parallel programming easier. The vital importance of her work was recognized this week with a Sloan Research Fellowship—one of just 16 awarded to computer scientists in the United States and Canada.

“I’ve followed the careers of the Sloan Research Fellows in my particular area of computer architecture, and there is typically zero to one recipient a year,” said Professor Enright Jerger. “So I wasn’t expecting it when I heard the news. I was thrilled—it’s a great honour.”

The Sloan Research Fellowships were established in 1955 to “stimulate fundamental research by early-career scientists and scholars of outstanding promise.” Fellowships come with a $50,000 research grant over a two-year term.

The 2015 cohort, 126 Fellows across a variety of subject areas, was announced in a full-page ad in the February 23, 2015 edition of The New York Times.

One of eight recipients from a Canadian institution—six of which hail from the University of Toronto—Professor Enright Jerger joined the University of Toronto in 2009 as an assistant professor after completing her PhD at the University of Wisconsin-Madison. Her group has grown to comprise one post-doctoral fellow, six PhD and three Master’s candidates. She plans to use the research funds to support student stipends and fund students’ travel to conferences.

Professor Enright Jerger continues to distinguish herself as one of the top computer architecture researchers of her generation—last year she received the 2014 Professional Engineers Ontario (PEO) Engineering Medal – Young Engineer for exceptional achievements in the field.