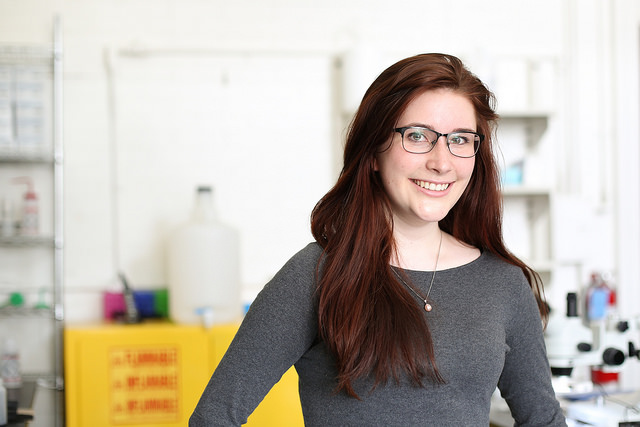 May 29, 2015
Samantha Stuart (Year 2 MSE) is one of this year’s recipients of the Engineering Ambassador Scholarship from the Canadian Engineering Memorial Foundation (CEMF) (Photo: Roberta Baker).

Materials engineering student Samantha Stuart (Year 2 MSE) has received an Engineering Ambassador Scholarship from the Canadian Engineering Memorial Foundation (CEMF), one of only five women from across Canada to receive the award.

The scholarship honours one student in each of Canada’s five regions — British Columbia, Prairies, Ontario, Quebec and Atlantic — who have shown leadership in attracting other young women into the engineering field. All five winners were presented with the award on May 21 in Calgary, at a reception held in conjunction with the annual Engineers Canada meetings. “It was inspiring to meet everybody else there and hear their stories,” says Stuart.

Stuart’s award recognizes her work reaching out to high school students in order to communicate the importance of studying science, technology, engineering and math (STEM) topics. She is in an excellent position to speak about STEM; before entering engineering at U of T, she won a gold medal and three other awards at the Canada-Wide Science Fair for developing a psychometric screener to measure Facebook addiction.

“I credit a lot of my success to mentors; people who have explained what STEM is and why it’s something I should consider,” says Stuart. “I wanted to jump in and do something right away to help other people have the same experience that I did.”

CEMF is dedicated to attracting women to the engineering profession so they may fully contribute to the development of our society and in so doing, honour the memory of the 14 women from L’ École Polytechnique whose contributions to Canada ended on December 6, 1989. In addition to the Engineering Ambassador Scholarships, CEMF administers several other scholarships for women in undergraduate or graduate engineering programs.

Throughout the past year, Stuart has been heavily involved in Science Expo Youth Empowerment Group, including running logistics for their major annual conference in Ontario. Science Expo is a not-for-profit organization that helps connect students interested in STEM with mentors, enrichment programs and other opportunities to learn more about the field.

Currently, Stuart is spending the summer conducting research in Professor Benjamin Hatton’s (MSE, IBBME) Microstructured Surfaces & Adaptive Materials Lab, working on bacteria-resistant coating for materials that can be implanted inside the human body, as well as studying silica-based films for use in optoelectronic devices like light-emitting diodes (LEDs).

She was also recently elected the Engineering Society’s Director for Hi-Skule, which runs design competitions to promote the study of engineering in high school and elementary schools. She already has lots of ideas, including starting a mentorship program.

“I think one of the big problems in high school is that you take math, you take chemistry, you take physics, but you don’t take engineering, so there’s a general confusion about what it actually is,” she says. “I’m really excited to take on that challenge.”

“Great roles models are essential for inspiring a new wave of young minds to chart new frontiers,” says Professor Jun Nogami, chair of the Department of Materials Science & Engineering. “My sincerest thanks and congratulations to Samantha for all the work she has done in championing our discipline and motivating others to pursue similar successes.”