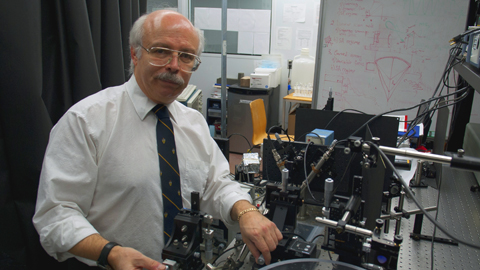 Professor Andreas Mandelis (MIE) sits at the intersection between engineering and applied physics, where his work with lasers is helping to diagnose diseases like breast cancer, manage diabetes and even spot flaws in the manufacturing of electronics and other goods.

This pioneering research has recently garnered Professor Mandelis a 2014 Killam Prize, one of Canada’s most prestigious scholarly awards. Administered by the Canada Council for the Arts, this award comes with $100,000 and is given to only five researchers annually.

Professor Mandelis uses light to see small differences in the human body or other materials that have previously gone undetected. He uses physics to understand light’s basic properties, while engineering new tools with wide potential for application.

“Being able to do the science is very important to me,” he said, “while at the same time, applying engineering principles and seeing it materialize in new technology for areas that need it, like breast cancer tumour detection.

“It brings the science to its ultimate goal – the service of our community and country.”

X-ray and ultrasound are two of the most common techniques used in medical diagnosis, but they are limited by how far and how well they can “see” into tissue. That’s where lasers come in.

“For example, when a tumour starts to grow, it is accompanied by the growth of new blood vessels,” he explained. “Non-invasive lasers can spot these blood vessels earlier than ultrasound machines, because blood in the vessels absorbs light differently than surrounding tissue. Using laser light energy converted to ultrasound (known as the photoacoustic effect), we can detect tumours earlier.”

The same theory applies for diabetics who currently prick their finger to measure their blood glucose level. Glucose absorbs into our skin at different rates, and lasers can help detect these small differences through light conversion to heat. This provides an accurate measurement without the prick.

Professor Mandelis’ multi-disciplinary research has introduced novel laser probing and imaging methods in wide ranges of manufacturing – from aerospace and automotive to optoelectronics and nanoscale materials. In some areas, they allow for testing at every step of the manufacturing process in a non-destructive manner.

“We are delighted that the Canada Council of the Arts has recognized Professor Mandelis for his exceptional contributions,” said Dean Cristina Amon. “The widespread use of his research in so many fields demonstrates the impact that engineering has in improving our daily lives.”

Mandelis is the director of the Centre for Advanced Diffusion-Wave Technologies in the Department of Mechanical and Industrial Engineering (MIE). He is also cross-appointed to the Institute for Biomaterials and Biomedical Engineering (IBBME) and The Edward S. Rogers Sr. Department of Electrical & Computer Engineering (ECE).

He has been widely recognized for his contributions to both applied science and engineering, including the Canadian Association of Physicists (CAP) Medal for Outstanding Achievement in Industrial and Applied Physics (2009), the CAP-INO Medal for Outstanding Achievement in Applied Photonics (2012), the ASME Yeram Touloukian Award in Thermophysics (2009), and the American Physical Society’s 2012 Joseph F. Keithley Award for Advances in Measurement Science (2012). In 2006, he was also elected a Fellow in the Academy of Sciences of The Royal Society of Canada.

Read more in the Toronto Star.