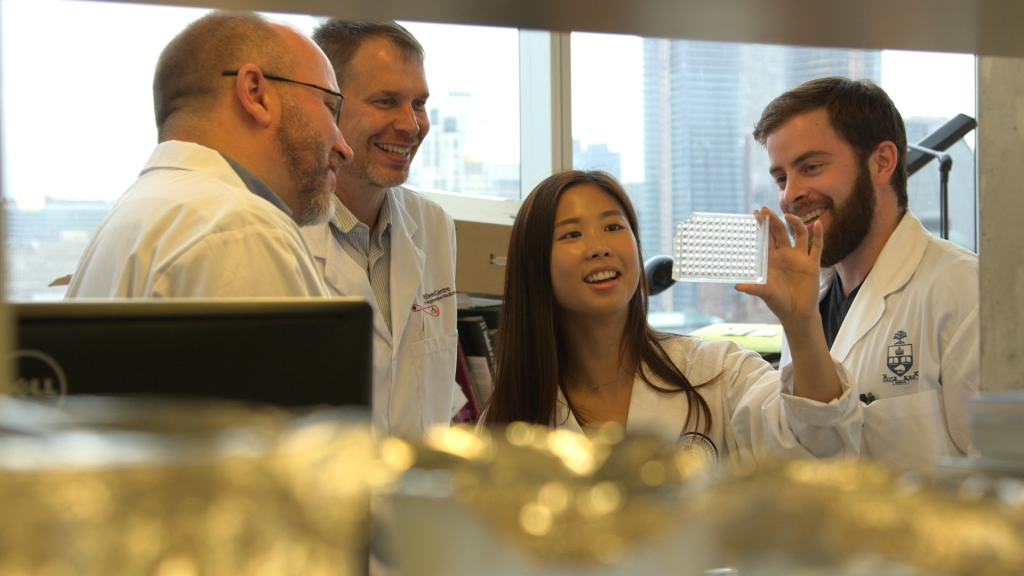 Faculties of Engineering, Dentistry and Medicine to collaborate in new Translational Biology and Engineering Program

April 28, 2015
The Translational Biology and Engineering Program (TBEP) will be a key component of the Ted Rogers Centre for Heart Research
Human Health

Researchers from the Institute of Biomaterials & Biomedical Engineering (IBBME) continue to build on the Faculty of Applied Science & Engineering’s unparalleled strengths in biomedical engineering with the establishment of the Translational Biology and Engineering Program (TBEP)—a key component of the Ted Rogers Centre for Heart Research (TRCHR).

TBEP will occupy an entire floor of the MaRS Phase 2 building in Toronto’s Discovery District beginning in fall 2015. It will be a powerful addition to the network of researchers and educators at the TRCHR aiming to accelerate treatment development and reduce the estimated $2.3-billion cost of managing moderate and severe heart failure patients in Canada.

Ten U of T researchers and their graduate students from U of T Engineering, the Faculty of Dentistry and the Faculty of Medicine will work side-by-side in the open and collaborative research space to advance clinical applications in genomic medicine, regenerative medicine, tissue engineering and advanced cardiac care.

“The idea of creating an inter-disciplinary research centre focused on discovery and clinical translation in the area of cardiovascular disease is really exciting,” said Peter Zandstra (IBBME), interim scientific director at the TRCHR. “Although there are inter-disciplinary research centres in different places, one that is exclusively focused on heart failure and cardiovascular disease like this one is unique internationally and should enable accelerated outcomes and focused impact.”

Zandstra, who is the Canada Research Chair in Stem Cell Bioengineering and a professor at IBBME and the Donnelly Centre for Cellular & Biomolecular Research, has been managing the start up of the TRCHR and organizing the TBEP component.

U of T Engineering researchers at TBEP

TBEP’s roster of U of T Engineering faculty includes award-winning researchers Rodrigo Fernandez-Gonzalez (IBBME), Paul Santerre (IBBME, Dentistry) and Craig Simmons (MIE, IBBME), who will combine stem cell technology with new approaches in biomaterials, cellular and tissue engineering for the regeneration of heart muscle, coronary vessels and heart valves. All of the participating engineers are inspired by the prospect of working in a collaborative environment where researchers from multiple disciplines are engaged in a continuum of discovery and translation.

Santerre, a former director of IBBME, was central in developing U of T’s scientific research in the partnership. His research will focus on developing polymer technologies that reduce inflammation around life-saving devices such as stents and stem cell delivery systems, allowing heart cells to repair themselves and preventing longer-term complications like blood clots and fibrosis.

“If you can reduce some of the long-term management elements by allowing these cells to repair themselves better, we are reducing the burden on the health-care system in the most phenomenal way,” Santerre said.

Santerre said that in his experience, it takes about 20 years to get a treatment into clinical practice once a research idea is conceived. He believes this timeframe can be reduced by at least five years because of the cluster of experts at the Centre working together.

“To me, that’s the power of this initiative—the ability for those three institutions to lend out this brainpower that has demonstrated a unique ability to collaborate in other instances,” he said. “The resources are there to actually bring the world to Toronto on this theme.”

Simmons is collaborating with Sick Kids to develop treatments for babies born with congenital heart defects. The work involves growing tissue from stem cells taken from the baby’s umbilical cord and putting it on a “bio-scaffold” that degrades away, leaving a valve made of the baby’s own cells. The end goal is to develop a “living tissue” valve that restores normal heart function and doesn’t have to be replaced as the child grows.

Simmons said that much of his work is at the interface of medicine and engineering, so it demands collaboration—one of the Centre’s biggest strengths.

“We’re going to be imbedded on the same floor as people from the Faculty of Medicine and within a hospital research complex, so our students will be working side-by-side, exchanging ideas with one another,” Simmons said. “The interaction that will occur just because we’re physically in the same place is bound to result in new ideas, new approaches and new innovations that wouldn’t have happened otherwise.”

Fernandez-Gonzalez applauds the Centre’s embrace of fundamental discovery research—such as his study of fruit fly embryos to gain a better understanding of how heart cells develop or how they could be stimulated to repair themselves.

He said about 70 to 80 per cent of genes implicated in human diseases are found in fruit flies, so if researchers know which genes are key for cell repair in a fruit fly embryo, they can also gain an understanding about which genes may be important to repair the human heart.

The University of Toronto, Hospital for Sick Children, and the University Health Network announced the creation of the Ted Rogers Centre for Heart Research in November 2014, funded by an unprecedented donation of $130 million from the Rogers family—the largest monetary gift ever made to a Canadian health-care initiative. The Centre will bring together expert clinicians and researchers from across the partner institutions, as well as graduate students, postdoctoral fellows and clinical fellows who represent the future of the field.

The TRCHR will also establish a competitive innovation fund to drive discovery and development of next-generation therapies for heart failure, and an education fund to attract the best and brightest students and postgraduates to ensure a deep pool of talent in Canada for cardiac care and research.