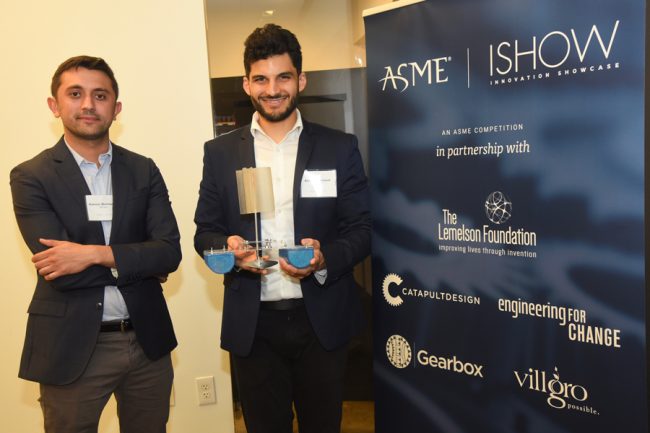 A team from U of T Engineering’s Centre for Global Engineering (CGEN) has won the top prize in a global competition for inventions with social impact.

The invention could be a boon to the more than 20 million farmers in the Asia-Pacific region who rely on small-scale aquaculture for food security and income.

“In the developed world, fish farms use electric blowers to deliver oxygen, but this equipment is costly and electricity is not always reliable in the developing world,” says Mahmoudov. “By contrast, our design uses a floating aerator, driven by a windmill, to deliver oxygen without the need for electricity. It’s low-cost, effective and easy to maintain and repair.”

The device is dubbed the WERLWind after the name of Bilton’s lab group: the Water and Energy Research Lab (WERL). Bilton and her students have been researching the challenge of oxygenation in fish farms for the past several years. Their collaborators include: WorldFish, a leading international research organization focused on aquaculture; BRAC, a global NGO; and CSIRO, Australia’s national science research agency. Through WorldFish and BRAC, the team is working directly with smallholders in Vietnam and Bangladesh to evaluate the impact of technologies on production improvements.

The team entered their prototype design in the American Society of Mechanical Engineering’s Innovation Showcase (ISHOW) and beat out more than 150 other competitors to become one of the eight finalists in the global competition. The finals were held in Washington, D.C. on June 13, with WETech taking the top prize of $10,000 USD. The team plans to use the funding to further optimize the system and build new prototypes for more extensive field evaluations.

“Winning this competition is a great vote of confidence for our technology, and signals that we are ready to take the next step,” says Mahmoud. “Building more full-scale devices and getting them out into the field will teach us a lot and really help improve futher designs.”

“This team is a great example of global engineering,” says Bilton. “Their innovation can address common challenges while taking account of local context. I’m proud of what they’ve been able to accomplish and am excited about the potential of this technology to improve farmer’s incomes and quality of life.”