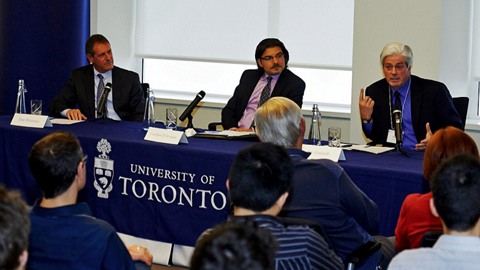 The future of flight: Leaders in aviation predict big things at BizSkule

Drone delivery service. Autonomous personal aircraft. Circumnavigating super-ships. These aren’t excerpts from a sci-fi movie script – they’re the future of aerospace. And they were just some of the industry projections that three aerospace leaders shared with U of T Engineering alumni and friends at BizSkule: Next Generation Air Travel.

The panel event, held April 30 at law firm Bennett Jones’ offices in Toronto’s First Canadian Place, was the second installment of 2014 for the esteemed speaker series, which kicked off in California with a panel on cloud computing earlier this year.

Moderator David Zingg (7T9 EngSci, 8T1 MASc AeroE, 8T8 PhD Aero), professor and director at the University of Toronto Institute for Aerospace Studies (UTIAS), steered the panel through a variety of topics, from environmental sustainability to solar technology, but the discussion began with predictions that hit closest to home — personal air travel.

“I think you’re going to find that the overall experience, as a passenger, is going to deteriorate,” said panellist Dan Breitman (UTIAS MASc 7T9), retired vice-president of engine development programs at Pratt & Whitney Canada. “In the next 15 years, it’s going to be an even more unpleasant experience. But born out of that, you’re going to see alternatives.”

One such alternative is the growth of the private aircraft sector. A second panellist, Carmine D’Orsogna, manager of engineering for Bombardier Aerospace’s Global Express line of premium business jets, already sees this happening.

“When we started the [Global Express] program 20 years ago, it was forecasted to sell 200 airplanes,” he said. “We’ve now sold five times what we initially thought. I see that growth continuing in the near future with more people being able to afford that type of travel.”

“What’s going to open up a lot in the next 15 years is remote areas, and getting away from the city and being able to get to these locations hassle-free,” he said. “I don’t think it’ll be a helicopter, it’ll be a different kind of aircraft.”

Autonomy in the skies

Last year, when Amazon CEO Jeff Bezos announced that the online retailer would use autonomous aerial vehicles for deliveries within the next five years, it cast an exciting light on the future of aerospace.

All three BizSkule speakers agreed on the benefits of drones for delivering goods, especially, according to Godsall, the delivery of medicines and diagnostics to areas with outbreaks of infectious diseases. Breitman, however, applied a word of caution to the pilot-free mode of transportation.

“Employment is going to shift dramatically,” he said. “You’re going to find that, literally overnight, huge industries no longer need people to do certain tasks and their costs are going to come tumbling down. It’s going to create wealth on one side, and agony and pain on the other. It’s going to be an extremely disruptive technology.”

Long-term forecasts from the panel emphasized the development and use of electric, non-fossil fuel burning and autonomous personal aircraft within the next 50 years. The dream of parking a self-flying vehicle in your driveway could very well become a reality. “When your kid asks for the keys to the airplane,” Zingg joked, “autonomy sounds pretty good.”

While soaring above the clouds in your own autonomous aircraft may seem like a blue-sky idea, Godsall offered up the most fantastical vision of the evening.

Is it as far-fetched a projection as it sounds? Only time will tell. The sky no longer seems to be the limit.

Watch video of the panellists.

The final BizSkule event of the year is scheduled to take place in the fall.