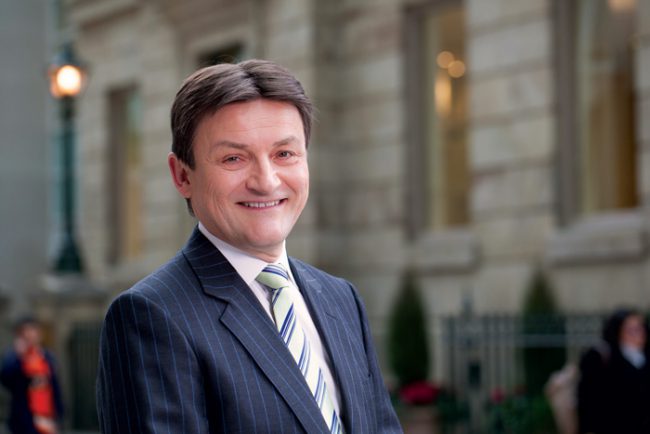 George Myhal receives honorary degree from U of T

November 8, 2018
George Myhal (IndE 7T8) has received an honorary Doctor of Laws from U of T. (Photo courtesy of George Myhal)

Alumnus George Myhal (IndE 7T8) was recognized by the University of Toronto for his distinguished career and exceptional contributions with a Doctor of Laws, honoris causa at the U of T Engineering convocation ceremony on Nov. 8, 2018.

“George Myhal has had an outstanding career as a leader in the Canadian business community and has been extraordinarily generous in giving back through volunteering and philanthropy,” said Dean Cristina Amon. “U of T Engineering is a better place as a result of his generosity, dedication and leadership.”

After graduating from U of T’s Industrial Engineering program and qualifying as a chartered accountant, Myhal embarked on a distinguished 34-year career at Brookfield, where he made outstanding contributions to the development of their $250 billion asset management business. He retired from Brookfield in 2015 and currently serves as president and CEO of Windermere Investment Corporation.

Despite a demanding career, Myhal has always made time to contribute to his alma mater and to his community. He served for many years on the University of Toronto’s Governing Council and the Engineering Dean’s Advisory Board, offering valuable counsel on several important initiatives. He has also served on the Great Minds campaign cabinet and the Boundless campaign executive. An early champion of the Myhal Centre for Engineering Innovation & Entrepreneurship, his support was instrumental in the successful launch of this cutting-edge multidisciplinary centre. Myhal has also made extensive philanthropic contributions outside of U of T, to organizations such as the United Way, the Sick Kids Foundation and the Ukrainian Canadian Care Centre.

Myhal has been previously honoured by the University of Toronto with an Arbor Award, the 2T5 Mid-Career Achievement Award from the Engineering Alumni Association, and induction into the Engineering Hall of Distinction. In 2017, he was named a Member of the Order of Canada, the nation’s highest civilian honour.