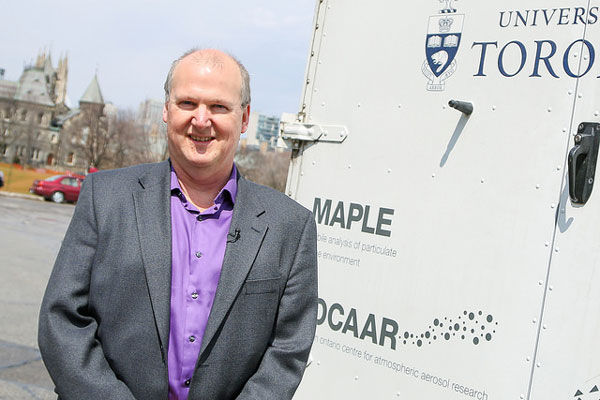 Greg Evans elected a Fellow of the AAAS

November 23, 2015
Professor Greg Evans (ChemE) has been elected a Fellow of the American Association for the Advancement of Science (AAAS). (Photo: Roberta Baker)

U of T Engineering professor Greg Evans (ChemE) has been elected a Fellow of the American Association for the Advancement of Science (AAAS), the world’s largest general scientific society. The honour recognizes his distinguished contributions to air pollution research and his leadership in engineering education.

Evans joined the University of Toronto in 1990, and began his world-leading research on the causes and effects of poor air quality, especially airborne particles in large cities. His work includes the development of new analytical instruments as well as advanced modelling methods. In 2003 he founded the Southern Ontario Centre for Atmospheric Aerosol Research (SOCAAR) and in 2008 expanded the project to create the Canadian Aerosol Research Network (CARN). These networks, as well as Evans own lab group, have produced a number of key publications regarding the creation of aerosol pollution and its impact on human health.

Evans is also a recognized leader in engineering education. He served as the chair of first year at U of T Engineering from 2003–2005 and the vice dean, undergraduate from 2005–2007. He also led the creation of the Engineering Communication Program, which helps undergraduate engineers build professional-level communication skills.

Evans currently serves as associate director of the Institute for Leadership Education in Engineering (ILead). This program, unique in Canada, provides advanced leadership development programming for students across the faculty, integrating both theory and practice. Evans also spearheaded the creation and implementation of the Graduate Collaborative Program in Engineering Education (EngEd), the first engineering education graduate program in Canada. The program, which launched September 2014, allows master’s and PhD students to pursue interdisciplinary research at the nexus of education and engineering.

Evans has been recognized with many previous awards and honours. Within U of T he has received the Joan E. Foley Quality of Student Experience Award, the Faculty Teaching Award, the Northrop Frye Award and the President’s Teaching Award, U of T’s highest teaching honour. He has also received the Alan Blizzard Award from the Society for Teaching and Learning in Higher Education, the Ontario Confederation of University Faculty Associations (OCUFA) Teaching Award and the Engineers Canada Medal for Distinction in Engineering Education.

“On behalf of our entire Faculty, heartfelt congratulations to Professor Greg Evans on this richly-deserved recognition,” said Dean Cristina Amon. “His outstanding research and commitment to excellence in engineering education have been instrumental in advancing U of T Engineering’s mission to nurture the next generation of global engineering leaders.”