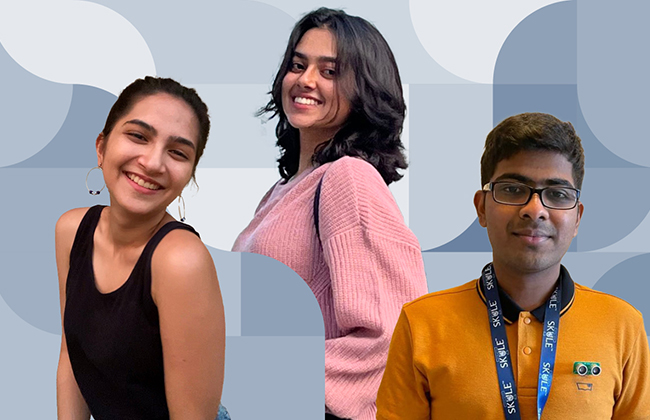 ‘High energy and optimism’: International Pearson Scholars start at U of T Engineering

This year, three Pearson Scholars —  Vishweswar Eswaran (Year 1 ElecE), Angel Rajotia (Year 1 EngSci) and Maansi Suri (Year 1 MechE) — chose to join U of T Engineering. Hailing from India and Dubai, they join the one-quarter of undergraduate students in the Faculty who come  from outside of Canada.

They spoke to writer Tyler Irving via email about their journey to U of T, their experiences to date, and their hopes for the future.

Born in Madurai, India, Eswaran went to school primarily in Dubai, United Arab Emirates. Since he was a child, he has loved tinkering and exploring the way machines worked.

“Even the sturdiest toy used to have a maximum shelf-life of three days under my control,” he says.

It was when he designed a navigation aid for a visually impaired relative that Eswaran realized that engineering — which he calls “the empowering discipline” — was not only fun, but could have real impact.

Eswaran says he chose U of T Engineering for its emphasis on teamwork through courses such as Engineering Strategies and Practice, as well as the opportunity to gain work experience through the PEY Co-op Program. He has already joined the Spark Design Team, which hopes will help solidify the knowledge gained through his courses.

Eswaran dreams of a career in circuit design, though he says he is also interested in applying his electrical engineering skills in unconventional areas, such as precision agriculture.

“While I have long-term plans of working on feasible solutions to global problems, for now I want to hone my professional skills and understand the industry before embarking on a larger journey.”

Rajotia was born and raised in Chandigarh, a small city in northern India.

“I live in a joint family, with my grandparents, parents and my younger brother,” she says. “My parents have always been very supportive of me.”

Growing up, Rajotia had a strong inclination towards both the sciences and the arts. To help her choose, she sought out mentors from all walks of life. Engineering won out because of the way it can be applied to solve problems in a wide range of contexts.

“Science and technology can help create real working solutions for the most ignored parts of the global population,” she says. “Engineering has a very vast scope for creating meaningful change, and lets me explore my interests to the best of my potential.”

Rajotia is keen to maintain an interdisciplinary perspective. For that reason, she found herself drawn to U of T’s Engineering Science program, which will enable her to pursue a structured study plan that includes the sciences, engineering and the humanities.

Equally attractive was the chance to live in one of the most diverse cities in the world.

“As soon as I landed in Toronto, I immediately fell in love with the city,” she says. “F!rosh week started off with high energy and optimism for the upcoming year. I met a lot of new people and had memorable conversations with all of them.”

Engineering Science is challenging, but Rajotia says that she draws strength from the other students in the program.

“I realize things can get overwhelming sometimes, but I know I can always reach out for help,” she says. “This is going to be a ride full of ups and downs but what I get out of the U of T education will be very rewarding. Whether I go to grad school after graduation or join the workforce, graduating with an EngSci degree will lead to a world of opportunities!”

Suri was born in Dubai, but holds Indian citizenship and completed her schooling in India. Her early exposure to engineering included internships at Mace International — where she worked on the Ain Dubai, the largest observational Ferris wheel in the world — and Jacobs Engineering. She also took summer courses at Emirates Aviation University and the University of Michigan Ann Arbor.

It was while studying at a medical summer program at St. George’s University in Grenada that Suri realized she was more inclined towards bioengineering.

“I loved learning about developments in recent technologies like robotic surgery, the development of biohybrid materials and the use of augmented reality in medicine,” she says. “The fact that I could specialize in this field was a big factor in choosing U of T Engineering.”

Suri says her most memorable experiences include F!rosh week and studying with friends in the urban lounge at Chestnut residence.

“Both these experiences help establish and foster a sense of community that helps us cope with the challenging workload,” she says. “It is comforting to know that we’re not experiencing such a significant shift alone.”

Having learned six different styles of dance in high school, Suri is excited to audition and be a part of various U of T dance teams. She also plans to join other clubs and student societies, and to pursue opportunities to learn more about business.

“I took business management in high school and became very interested in entrepreneurship as it relates to engineering,” she says. “I plan to pursue the Engineering Business minor, and work either as a consultant, or on research and innovation in the field of prosthetics.”