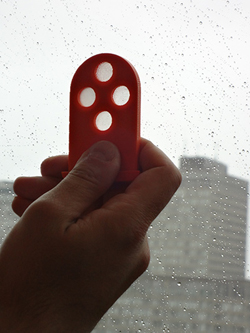 IBBME to Celebrate 50 Years by Looking 50 Years Ahead

September 24, 2012
The Aggrewell, a tool to growstem cells in uniform colonies.

A small instrument resembling a mini-chocolate grater may not look like much to the untrained eye, but an object like this is a glimpse into the future of medicine.

On October 10, as part of its 50th Anniversary celebration, the Institute of Biomaterials and Biomedical Engineering (IBBME) is hosting ‘Tomorrow’s Technology Showcase,’ a world’s fair of biomedical engineering devices at the frontier of medicine.

The showcase is a part of a free, one-day international symposium, ‘Defining Tomorrow: Advancing the Integration of Engineering and Medicine.’

The event brings to Toronto speakers such as James Fawcett of Cambridge University, a world-leading researcher on nervous system and spinal cord repair, and Miguel Nicolelis of Duke University, a pioneer in neural interfaces for overcoming paralysis.

International thinkers will present alongside the incredible talent U of T has to offer, including engineering Professors Milos Popovic (IBBME) and Molly Shoichet (ChemE/IBBME), to name a few.

But not everything about the day will be academic.

Sponsored by the Ontario Brain Institute (OBI),  companies such as GE Healthcare, STEM CELL, and Octane Biotech, as well as IBBME’s commercialization partners, not-for-profit organizations CCRM and (UHN’s) Techna, will display biomedical devices that will define our future.

The ‘Aggrewell,’ something looking like a cross between a penny holder and a grater, is one such device. Developed by a former IBBME Research Associate as a tool to grow stem cells in uniform colonies, Aggrewell is currently produced by STEM CELL, a company that primarily sells products to scientists conducting stem cell research in areas such as cancer, heart disease and more.

Another  of the day’s presenters will be Interface Biologics Inc. (IBI), whose biomaterial product, Endexo™, has recently been cleared by the U.S. Food and Drug Administration (FDA) for use in AngioDynamic catheters in the United States.

The catheter is manufactured using a biomaterial developed by IBBME’s Director, Professor Paul Santerre.  The biomaterial reacts to the catheter in such a way that it prevents blood coagulation, virtually eliminating the risks of blood clots  – a serious danger for kidney dialysis patients, as an example – without drug additives.

Tomorrow’s Technology Showcase will be held at U of T’s Chestnut Conference Centre (89 Chestnut St.) on October 10, 2012.  Space is limited for this free event, so register early and before October 1.