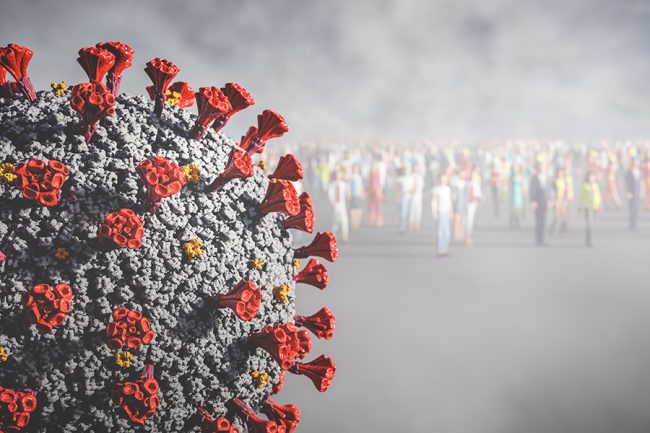 December 7, 2020
An improved mathematical model developed by an international team combines the “physics of the cloud” with the “physics of the crowd” to predict the dominant modes of transmission for the SARS-COV-2 virus that causes COVID-19. (Image: photocreo, via Envato)

After nearly a year of studying COVID-19, scientists are still grappling with fundamental questions — including understanding the dominant modes of transmission and predicting how “superspreading” events arise. A newly improved model produced by engineers and physicists could help.

Last summer, Professor Swetaprovo Chaudhuri (UTIAS) and his colleagues developed what they called a “first-principles modelling approach” to understanding the factors that impact COVID-19 spread.

The team — which also included Professor Abhishek Saha at the University of California San Diego, and Professor Saptarshi Basu of the Indian Institute of Science — outlined their findings in a paper published in the journal Physics of Fluids.

Unlike epidemiological models that predict the spread of a disease based on empirical data from past outbreaks or from estimating person-to-person contact, this model makes use of fundamental flow physics concepts, droplet and jet aerodynamics, evaporation and related thermodynamics.

The idea was to simulate the physical path of droplets expelled by infected people, along with their physical state. The model can be used to predict the probability of transmitting the infection from one person to another

“In the previous paper, we analysed lifetime and travel distance of individual respiratory droplets of different sizes,” says Chaudhuri. However, one respiratory event produces not one droplet but a jet: a cloud with a large range of droplet numbers and sizes. When these droplets evaporate, they leave behind solid nuclei, which also form part of the cloud.

Led by Professor Chaudhuri, the team published their improved model in another paper in Physics of Fluids, which takes account of this cloud-like aspect. The model draws inspiration from the experimental works of Professor Lydia Bourouiba at MIT, whose team has published extensively on the fluid dynamics of disease transmission.

The team also accounted for interactions between people and the cloud in a social setting, which was modelled using equations originally designed to describe collisions between molecules in a chemical reaction.

Distinctions can be made between different types of respiratory events — coughing, breathing, singing, sneezing or even talking. The model also incorporates the most recent information about typical SARS-CoV-2 viral load and virus lifetimes.

R0 can be thought of as the expected number of new cases that each current case will give rise to over its lifetime: if it is above one, the disease will continue to spread exponentially; if not, the pandemic will eventually burn out.

As before, the team tested their basic droplet model with an acoustic levitator, a device that uses sound waves to cause droplets of saline solution to float suspended in air. This time, the team used real saliva of “a healthy subject who was Covid-19 negative.” The experiment was performed at the Indian Institute of Science in Bangalore and results will be published in a future paper.

Inferences of the model include:

As for advice to reduce the spread, Chaudhuri says while he is not the expert, the following holds true from their model: wear a mask (three layered masks are most effective), avoid spending time indoors in public places, improve ventilation, keep as far apart as possible, and also wash hands frequently.

Chaudhuri acknowledges that this model is based on an idealized scenario and includes a number of assumptions. One of the most important relates to what degree the virus particles embedded inside the droplets remain infectious after the liquid surrounding them has evaporated, a question he says is “still an ongoing research problem for virologists.”

But he says the value of a physics-based approach is that the same basic framework can be adapted to different scenarios simply by adjusting certain parameters or the boundary conditions of the analysis.

“Additional complexities in terms of room size, partitions, ventilation, could be introduced and accounted for,” he says.

Going forward, the team hopes to collaborate with more researchers outside their discipline to address some of the areas where their model could be further improved. Chaudhuri stresses the multidisciplinary nature of the challenges posed by COVID-19.

“This is a problem which involves, doctors, public health researchers, epidemiologists, virologists, mathematicians, computer scientists, as well as experts in aerosols and fluid mechanics,” he says. “We have to work together to gain a complete picture.”