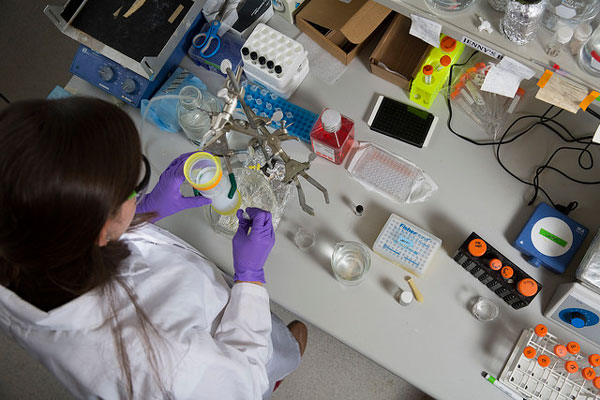 Originally published in the 2015 issue of Interfaces Magazine.

Not so long, lessons on bioethics and the history of medicine might have seemed out of place in an engineering program, but today, they blend easily into the diverse menu of courses in U of T’s Bioengineering Minor. The program was launched in 2006 in the recognition that biological applications were increasingly taking center stage in technological advancement.

“We also recognized that students were quite curious to learn more,” says Professor Emma Master (ChemE), director of the Bioengineering Minor. “They were hearing more about it in the news and were curious what bioengineering means — and what it can do.”

Although bioengineering only congealed into a recognized field in recent decades, Master notes that technological processes and designs rooted in biology have a long history. The use of microbes to ferment yogurt, cheese, beer and wine, for example, are all ancient applications of biology. Microbial processes have also been used in sewage treatment for over a century. Today’s bioengineering has leapt beyond yogurt and beer to span everything from developing brain-computer interfaces to synthesizing plant-based polymers that could replace plastic.

“The common thread is the application of biology in many areas,” says Master.

Bioengineering students like Jandi Kim (ChemE 1T5), who graduated in the spring, have the opportunity to conduct research that gives them practical and theoretical know-how, and helps lay the groundwork for new technologies. For her undergraduate thesis, Kim assessed the toxicity of air samples across Canada — specifically, the oxidative capacity of particulate pollution in the air.

Oxidative damage to the skin, for example, contributes to skin aging. Particulate matter in the air, especially the tiny, 2.5 micrometer variety that Kim studied, has been linked to respiratory diseases, including lung cancer, possibly by inducing oxidative stress. Under the supervision of Professor Greg Evans (ChemE) and former postdoctoral fellow Krystal Godri Pollitt (ChemE 0T5, MASc 0T8), Kim worked to determine just how much oxidative damage these particulates could inflict on our lungs. She tested 392 samples from British Columbia, Alberta, Ontario and Quebec by mingling the particulates with synthetic lung lining fluid. The fluids contained the same anti-oxidants found in the natural equivalent, and after incubating the samples with the “lung lining” for several hours, she measured how much these anti-oxidants had been depleted.

After nearly a year of extractions, pipetting, measurements and data analysis, Kim appeared to have her preliminary results revealing variation in particulate toxicity across the provinces, as well as differences between rural and urban air. Kim also learned how research is an iterative process and rarely runs smoothly on the first go. Curious patterns in Kim’s control data revealed there’d been a systemic error somewhere along the way, possibly in mixing or pipetting. Until the error is found and corrected, her results remain tentative, but despite the complications, the process has left Kim satisfied.

“I was very glad that I did something from the beginning, and I found the result from my research,” she said. Though she graduated in June, she’s still working to pinpoint the cause of the error and is keen to see the project through.

“Things don’t always go as planned — that’s what research is all about — but when it does, it’s a wonderful feeling,” says Neskovic, who completed her undergraduate thesis with University Professor Michael Sefton (IBBME) focusing on the role of a novel biomaterial and the complement protein system on blood vessel growth.

Endothelial cells are a critical component of blood vessel growth, or angiogenesis, which line the interior vessel walls and migrate to the site of a wound or developing tissue.

For Neskovic, a chemical engineering graduate, work with tissue cultures was an entirely new experience, but she says she quickly learned what she needed to and got her experiments underway.

Researchers aren’t sure exactly how this occurs, so to start answering that question, Neskovic conducted what are called “scratch assays”: simulating wounds in thin layers of lab-grown endothelial cells. As wounds heal — even in lab-grown tissue — endothelial cells migrate toward the gap. When Neskovic threw MMA into the mix, she found it altered that rate of cell migration.

This finding alone doesn’t solve the puzzle of MMA’s growth-promoting powers, and further research will be needed to confirm Neskovic’s results, but her research contributes incrementally to finding the answer.

Since graduating, Neskovic has participated in the Next 36 program, an incubator program that accepts just 36 young entrepreneurs across Canada each year. She’s not sure where she’ll head next, but says she’s loving the entrepreneurial world.

Kim plans to pursue work in the environmental or pharmaceutical industry and she hopes to eventually go on to graduate studies.

“Advances in life sciences are escalating with the advent of genomics and automated platforms for studying biological systems,” says Master. “All this means that understanding fundamental aspects of biology is becoming increasingly an important part of being technically savvy.” 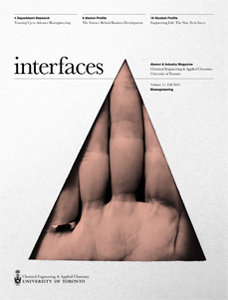 Interfaces Magazine is an annual publication from University of Toronto Department of Chemical Engineering & Applied Chemistry.