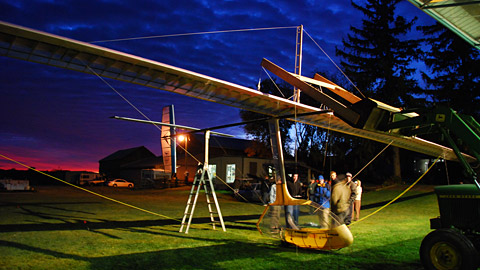 An historic human-powered ornithopter flight by the Toronto-based Snowbird in 2010 has been certified as a world record first by the Federation Aeronautique Internationale (FAI).

The Snowbird is a human-powered flapping wing aircraft that was designed and built by and Todd Reichert and Cameron Robertson of AeroVelo, while they were University of Toronto Engineering graduate students at the Institute for Aerospace Studies (UTIAS). The craft weighs just 42 kilograms (94 pounds), but has a wing span of 32 metres (105 feet).

With Reichert powering and piloting, the Snowbird sustained altitude and airspeed for 19.3 seconds, and covered a distance of 145 metres.

In addition to certifying their historic flight, the FAI also awarded Reichert and Robertson and their company AeroVelo with The Prince Alvaro de Orleans Borbon Grant, worth US $20,000.

According to the FAI Executive Board: “The unique projects that Todd Reichert, Cameron Robertson and AeroVelo have developed have become symbols for creativity and encourage youth participation and interest in sport aviation. The FAI Executive Directors were also convinced by the fact that this project was not only the result of innovative research but also directly enhanced the capability and understanding of students.”

Professor David Zingg, director of U of T Engineering’s Institute for Aerospace Studies, welcomed the recognition from FAI: “It is gratifying to see the superb quality of UTIAS graduates reflected in this outstanding international recognition.”

The grant was awarded in support of AeroVelo’s ATLAS Human-Powered Helicopter project, which is attempting to win the American Helicopter Society’s Sikorsky Prize for the first human-powered helicopter to hover for at least one minute and reach an altitude of three metres. Reichert and Robertson, along with a group of U of T Engineering students, have been working since May 2012 to build and fly ATLAS.

Providing opportunities for engineering students to experience real world applications of engineering practices and theories is a passion for both Reichert and Robertson, and is one of the main goals of the AeroVelo group. “The project offered a rare opportunity to work at the leading edge of engineering on an incredibly challenging and engaging project” said Reichert. “It’s where passion and science meet that you will find the innovative discoveries.”

On September 3, 2012, Atlas achieved a 17-second flight and became the first human-powered helicopter to fly with active pilot controls. Since then, the team has made further refinements that reduce the power requirements by roughly 20 percent, and is preparing for a second round of flight testing.