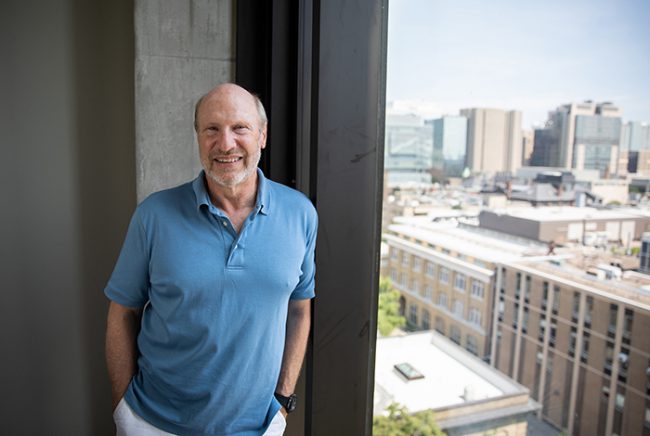 It takes a village to build a smart city: Mark Fox on culture of collaboration at School of Cities

Professor Mark Fox (MIE) was recently named associate director of research for the University of Toronto’s new School of Cities. With more than half of the world’s population now living in cities, the initiative brings together many research disciplines across U of T to solve pressing global issues facing urban areas.

Fox, a distinguished professor of urban systems engineering, envisions engineering researchers at the forefront of these efforts — as they always have been.

“Engineers are the foundation of city building, we are on the ground floor of this work. In fact, civil engineers literally built the floor,” says Fox. “You give me any discipline in engineering at U of T, and I can point to not one example, but probably 10 examples of city-related research.”

“Biomedical engineering — you may think, what does that have to do with city building? Think about cities that better accommodate the aging and infirmed. How do we develop tools to enhance people’s lives? I could go on.”

Fox says that engineers bring unique perspectives to complex challenges not only through their research, but in the way they think. “The way engineers approach solving problems is really, really important,” he says. “Not everyone can break down a problem, measure and evaluate each component in order to find solutions — that whole approach is not common outside of engineering, and it’s a necessary approach to city building.”

He also points to several U of T Engineering programs designed to develop a deeper understanding of urban issues and enrich the thinking of the next generation of engineers.

“The Engineering Strategies and Practice course for first-year students is so vital to changing the way our students approach fundamental design problems,” says Fox. He also credits the Faculty’s Master of Engineering in Cities Engineering and Management, which allows graduate students to explore cities as complex systems, equipping them with the skills to understand how infrastructure affects economic prosperity and quality of life.

The disparity of the urgent challenges facing cities means that they are being addressed by researchers working in fields across the University of Toronto’s three campuses. The School of Cities, Fox says, is critical to catalyze collaboration across traditional disciplinary lines, and to optimize funding opportunities and generate meaningful solutions.

“This will only succeed to the extent that all of us across the greater U of T is involved. School of Cities has to have a critical mass of people, it has to have a critical mass of funding, and it has to be something that gets researchers focused on a project for an extended period of time. Not two, three years, but five to 10 years,” said Professor Fox.

One of Fox’s first undertakings in his new leadership role will be to create a process for faculty members to submit their research ideas. A subset of projects will then be selected and provided with initial funding. The School of Cities’ leadership has already identified several potential key research challenges, focusing on:

Fox stresses that interdisciplinary collaboration will be key to solving all of these urgent urban issues.

“We’re hoping that we can be an environment where we can create a culture of coming together — across Faculties, departments, from downtown, to Mississauga, to Scarborough,” he says.

“When U of T says that we have 200 faculty working on cities related research, I believe it’s incorrect. I think it’s more like 2,000.”