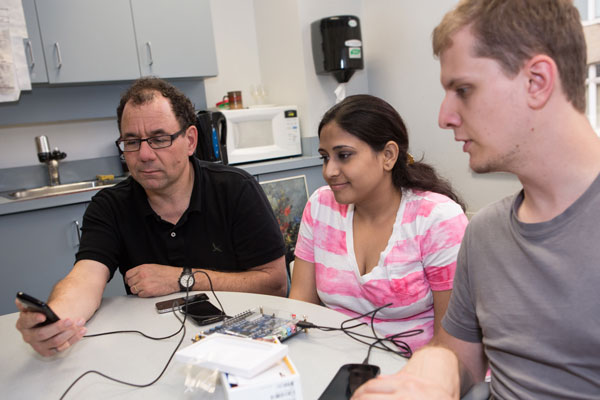 June 3, 2016
Jonathan Rose (left) has received the President’s Teaching Award, U of T’s highest honour for teaching. (Photo: U of T Engineering) 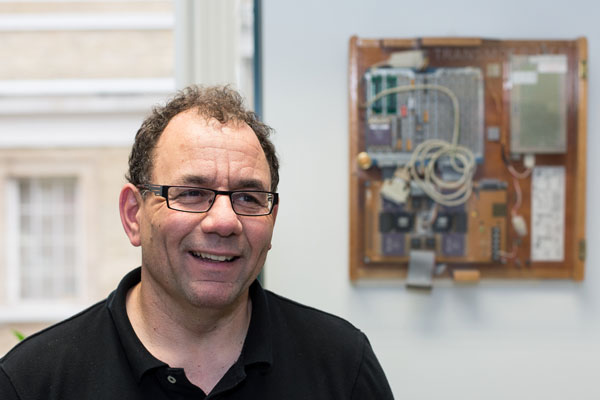 Professor Jonathan Rose (ECE) has been recognized for his outstanding teaching and leadership in engineering education with the President’s Teaching Award, U of T’s highest honour for teaching. This award was established in 2006 to recognize sustained excellence in teaching, research on teaching and the integration of teaching and research. Recipients are designated members of the University’s Teaching Academy for a five-year term.

Rose is known for his emphasis on the teaching of design and his long record of innovation in laboratory and design courses. In 2011, he created the multidisciplinary graduate course ECE 1778: Creative Applications for Mobile Devices, which brings together graduate-level engineering and computer science students to work with graduate students from other fields to create innovative and interdisciplinary smartphone mobile software applications. This course is unique in that it is offered to all graduate students at U of T. Over 110 new apps have been prototyped over the first six years of the course.

Having successfully commercialized his own research group’s innovations in the semiconductor industry, Rose is passionate about incorporating entrepreneurship into the curriculum. In 2004, he founded the Engineering Entrepreneurship Seminar series, which brought in guest speakers to share the story of their companies and inspire students to follow in their footsteps. Currently, Rose serves as the inaugural director of the Engineering Business minor, which he played a key role in developing. He was also a key mover in the creation of the Engineering Entrepreneurship Hatchery, and serves as chair of its Advisory Committee.

Rose was chair of the Edwards S. Rogers Sr. Department of Electrical & Computer Engineering from 2004-2009. During that time he prioritized the department’s teaching mission, going out of his way to celebrate excellence in teaching and to provide opportunities for professors to develop and improve their teaching skills.

Jonathan Rose’s achievements in teaching have been recognized internally and externally. He has received four departmental teaching awards, and in 2012 he received the Faculty Teaching Award. In 2014 he garnered the University of Toronto Faculty Award, for excellence in teaching and research. In 2015 he received the Faculty’s Sustained Excellence in Teaching Award. That same year he was awarded the Engineers Canada Medal for Distinction in Engineering Education, recognizing one Canadian engineering professor annually for outstanding teaching.

“Professor Rose has made tremendous contributions to engineering education through his creation of a first-of-its-kind graduate app design course, his leadership as chair of ECE, and his championing of programs to improve students’ business and entrepreneurial competencies,” said Dean Cristina Amon. “I am delighted that he has been honoured by U of T with the most prestigious teaching award.”