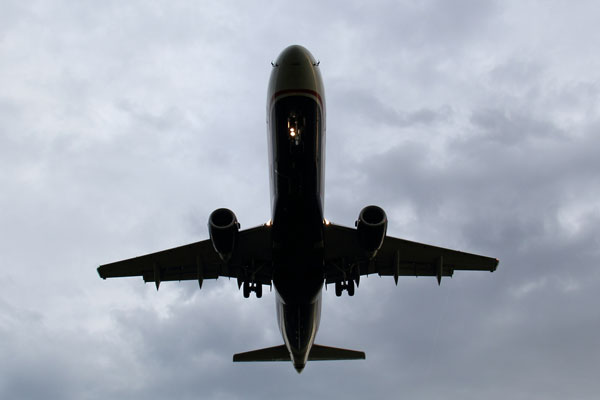 March 23, 2016
More than 100,000 commercial flights take place each day around the world. The Centre for Research in Sustainable Aviation at U of T’s Institute for Aerospace Studies aims to improve fuel efficiency and lower emissions, saving money and reducing environmental impact. (Photo: Travis Olbrich, via Flickr (Creative Commons))
Sustainability

This story is the second in a three-part series on the University of Toronto’s Institute for Aerospace Studies, produced over the winter and spring of 2016.

Two U of T Engineering professors are developing innovations in airplane design that could save hundreds of millions of litres of jet fuel every day and significantly reduce the environmental impact of flying.

Professors Craig Steeves and Philippe Lavoie are both members of the Centre for Research in Sustainable Aviation at the University of Toronto Institute for Aerospace Studies. Their research focuses on designing new lightweight materials and optimizing the flow of air over the wings and tail fins. The stakes are high: every day more than 100,000 commercial flights take off and land at airports around the world, each of which may burn 100,000 litres of fuel or more. Given these numbers, even slight improvements to fuel efficiency can make a significant dent in harmful carbon dioxide emissions, and save airlines — and maybe even passengers — billions of dollars.

One obvious way to reduce fuel consumption is to reduce the weight of the plane. Steeves and his team are investigating stronger, lighter materials as alternatives to today’s standard steel and aluminum aerobodies.

Steeves has been collaborating with Professor Glenn Hibbard (MSE) on designing materials that incorporate small-scale truss-like structures, similar to the scaffolding used inside the Statue of Liberty or for the Eiffel Tower. The materials are 3D printed using polymers and then coated with ultra-high strength nanocrystalline metal.

Using computer models as well as physical prototypes, the team designs and optimizes these structures for strength, stiffness, weight and other desirable properties.

“New techniques like 3D printing or automated fibre placement are enabling us to manufacture structures that are much more complicated than anything we could build in the past,” says Steeves. “This enables us to design structures with unprecedented capabilities.”

The team is also studying multifunctional materials that accomplish more than one task. For example, a structural panel could be designed to also block vibrations, eliminating the need for noise-dampening layers and further reducing the weight of the aircraft. “It’s a new era in structural and material design, because we’ve opened greater opportunities than we’ve had before,” says Steeves.

Another way to improve fuel efficiency is to use mechanical or electrical devices called actuators to manipulate the stream of air flowing over a wing or tail fin. Actuators are designed to maximize the lift force generated during takeoff, and minimize drag on the aircraft during cruising flight. This branch of engineering, called active flow control, is Lavoie’s specialty.

Aircrafts are generally most efficient when the air flow follows the shape of the wing. When the flow diverges from the wing surface — a state called flow separation — it results in a significant reduction in lift generation and increases drag. To prevent flow separation, the team places actuators at strategic locations on the wing’s surface. Some act like miniature jets, stirring up the air at strategic spots. Others, called plasma actuators, work by injecting a force on the air at strategic locations and times. This force is used to target instabilities in the flow to enhance or mitigate them, depending on the goal of the flow control.

In a wind tunnel, with a flat plate standing in for an airplane wing, Lavoie and his team test various actuator configurations. “A lot of the past work in this area has been done in computer simulations,” says Lavoie. “We are implementing practical systems to demonstrate whether the benefits observed in those simulations can actually be realized.”

Airbus, the European aircraft manufacturer, is collaborating with Lavoie’s group on using jet-style actuators to reduce friction during cruising flight. Eventually, the team hopes to also integrate sensors into the wing that could detect turbulence and automatically adjust the actuators. “The holy grail is some form ‘smart skin’ where you have arrays of sensors and actuators that can provide continual damping of these perturbations,” says Lavoie.

Lavoie and Steeves estimate that they could each improve efficiency by anywhere from five to 10 per cent. But in aviation, every little bit counts — a five-per-cent increase in fuel efficiency could mean 500 million litres of jet fuel saved every single day. If combined with other innovations — such as new shapes for aircraft or formation flying techniques — these engineering solutions could go a long way to make air transportation cleaner, greener and more sustainable.