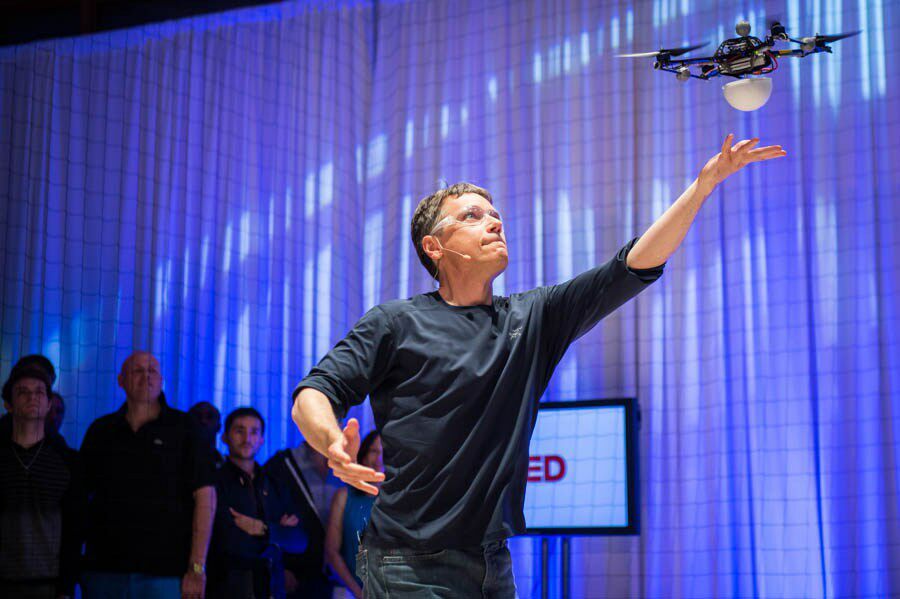 Making the entrepreneurial leap: a Q&A with alumnus and robotics pioneer Raffaello D’Andrea

May 27, 2015
D’Andrea demonstrates flight of a quadrocopter at TEDGlobal (Photo: James Duncan Davidson). 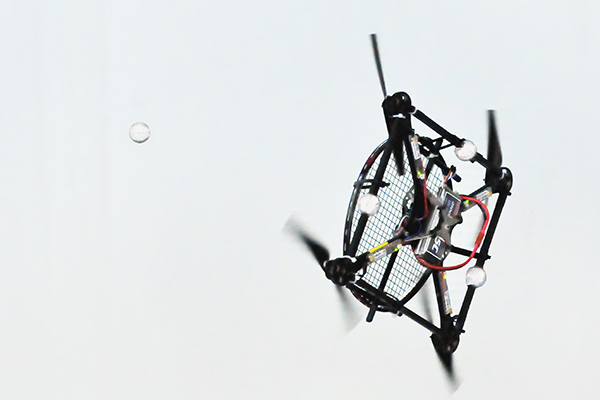 Although alumnus Raffaello D’Andrea (EngSci 9T1) has been an engineering professor, entrepreneur and artist, he’s better known as the inventor of several types of autonomous robots — machines that can juggle, play soccer and also accomplish more practical tasks.

In the early 2000s, D’Andrea co-founded Kiva Systems, a company that designs and builds large robotic systems that autonomously move, sort and distribute goods in warehouses. In 2012, Amazon acquired the firm for $775 million and incorporated hundreds of these self-propelled robots to fill orders in their distribution facilities.

In March, D’Andrea was recognized for advancing the field of robotics with the 2015 Engelberger Award from the Robotic Industries Association — sometimes called the “Nobel Prize” of robotics.

U of T Engineering recently sat down with D’Andrea — now a professor at ETH Zurich — to learn more about his cutting-edge robots, his entrepreneurial path and how strong fundamentals from U of T Engineering helped set him up for success.

Researchers and entrepreneurs could be viewed as very different career paths — do you find it difficult to move between the two?

Of course they’re very different worlds, but the way that I interact with them is the same. I like to create things, and I’m just fortunate that the things that I create have value in academia, in business and from an art perspective.

In this TED talk, U of T Engineering alumnus Raffaello D’Andrea shows what some of his flying robots can do.

Did your need to create things manifest itself when you were an Engineering Science student at U of T?

What was really great about Engineering Science was that in addition to a deep understanding of fundamental math and physics, we also got to use that knowledge in various projects. The second year capstone design project really allowed us to use some of what we learned to do things we didn’t think we could do before we started our degrees.

I remember that my team chose to build a voice-controlled robotic crane. You have to remember this was in the 1980s, and hardware was definitely not as far along as it is now. We had to build our own single-board computer, as well as all the interfaces, the mechanical design, and of course the software. It was a great way to apply all we had learned to do something completely new.

Did you know at that time that you wanted to be an entrepreneur?

My main focus was doing well in school, but I had glimpses of entrepreneurship. For example, I worked at Bell Canada one summer. When I came back to school, I took one of the problems that I had encountered and tried to develop a product to improve the equalization of signals in telecommunications equipment.

I positioned it as a fourth-year design project, but I also reached out to various local industries that could possibly make use of it. Eventually, it became clear it would take more time than I had, but I certainly learned a lot from that experience.

Can you talk about how you came to found Kiva Systems?

In the late 1990s I was the chief architect and faculty advisor of the Cornell Robot Soccer Team; we competed in the international RoboCup competition, where groups from around the world would field teams of autonomous, soccer playing robots. People would ask me: “What is the practical use of this?” I responded that I didn’t really know. But what I did know is that we were doing something that had never been done before, and that the competition was pushing the whole field of robotics forward.

Years later, in 2003, I was approached by Mick Mountz, who had worked at home grocery delivery company Webvan that had gone bankrupt, in part because their distribution costs were too high.

He had this idea that mobile robots could solve this large problem in distribution, and he found videos online of our soccer-playing robots. He was very convincing about the business need, and I felt that the technology was just on the cusp of being able to do it. So, along with Peter Wurman, a computer scientist, we built a company based on self-directed robots that could move goods in warehouses to exactly where they were needed.

By the time we were purchased in 2012, we had roughly 300 folks working at Kiva. Everyone was really excited about creating something that was really the first of its kind in the world. That was very motivating.

Did you find running a startup to be a big change from being a professor?

Not really, because I ran the RoboCup team in a way that was not that dissimilar from a startup. We had a team of people and a clear objective: to field a team of robots in that year’s competition. We had tight deadlines, we had to build prototypes, and of course we had to compete and win against all these other teams. So there’s a lot of similarity between doing that and running a startup.

How did being an engineer shape the kind of entrepreneur you became?

Actually all three of us — Mick, Peter and I — had a background in engineering. In a way, it was the glue that held us together.

But more generally, I think engineers are just really good at problem solving. They are good at seeing things for the way they are, and figuring out the most efficient solution.

One thing I learned was the importance of planning, especially long-term planning. We knew that creating this completely new system wasn’t something we could accomplish in six months. It took several years to do that, so we had to keep focused on the big picture. I think that really helped keep everyone motivated.

What abilities do you think the engineers of the 21st century will need?

Problem-solving skills remain the most important attributes of an engineer. I also think that the ability to learn on your own is very important. With so much information available online, it’s not so much about the knowledge, but in knowing how to learn things for yourself.

I do think that entrepreneurship is an important part of that, and that all engineers should be exposed to it in one form or another. The labour force of the future is going to be very different from the labour force of the past. People not going to be in the same company their whole life; they will change jobs every few years. So it’s useful to have classes or clubs that promote and develop entrepreneurship.

I think what U of T is doing is great in terms of giving people more choice and more opportunities. But of course, it’s also important to be focused. I was extremely focused as an undergrad. I have no doubt that if you set goals for yourself, and you really work hard to achieve them, that opens up new paths in front of you. So whether it’s as an entrepreneur or a researcher, I think it’s important to pick something and just go for it.

What’s next for you?

I have a new startup company. We’re mostly working in stealth mode right now, but we’re called Verity Studios and we recently completed a collaboration with Cirque du Soleil. Just like my work in the past, what really excites me is creating something that hasn’t been done before.

This interview has been condensed and edited.