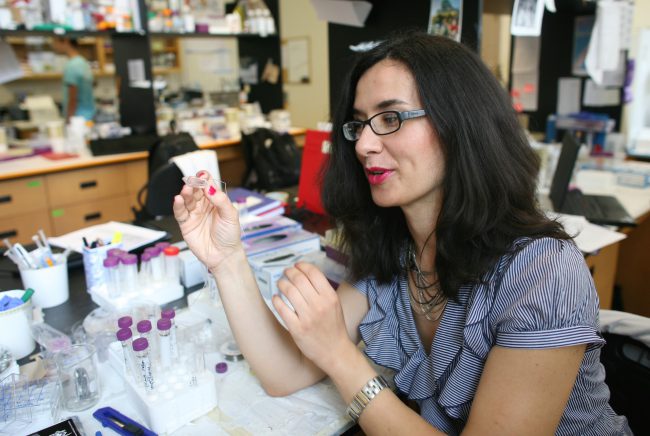 September 16, 2014
Milica Radisic will be inducted into the Royal Society of Canada’s new College of New Scholars, Artists and Scientists (Photo: Caz Zyvatkauskas).

Professor Milica Radisic (IBBME, ChemE) is among three U of T researchers named to the inaugural cohort of the Royal Society of Canada’s new College of New Scholars, Artists and Scientists – an initiative that recognizes the emerging generation of Canadian intellectual leaders.

Radisic, a researcher in both the Institute for Biomaterials and Biomedical Engineering (IBBME) and the Department of Chemical Engineering and Applied Chemistry (ChemE) at U of T, is a world leader in the field of cardiovascular tissue engineering. She was cited by the RSC for her innovative techniques in designing and developing new heart tissue derived from stem cells. Her contributions have been recognized by multiple national and international prizes, most recently an NSERC Steacie Fellowship.

“Milica Radisic has made exceptional contributions in the fields of tissue engineering and regenerative medicine” said Dean Cristina Amon. “Her pioneering research has the potential to revolutionize the treatment of cardiovascular disease. She is most deserving of this prestigious new honour from the Royal Society of Canada.”

Radisic joins three other U of T researchers in the College, including religious studies professor Amira Mittermaier and historian Nathalie E. Rothman. In total, the RSC has named 91 members to the College from 52 Canadian universities and other institutions.

The College of New Scholars, Artists and Scientists was created to gather scholars, artists and scientists at a highly productive stage of their careers into a single collegium where new advances in understanding will emerge from the interaction of diverse intellectual, cultural and social perspectives.

The initiative’s mandate is to address issues of particular concern to the group of interdisciplinary collaborators, for the advancement of understanding and the benefit of society, taking advantage of the interdisciplinary approaches fostered by the RSC.