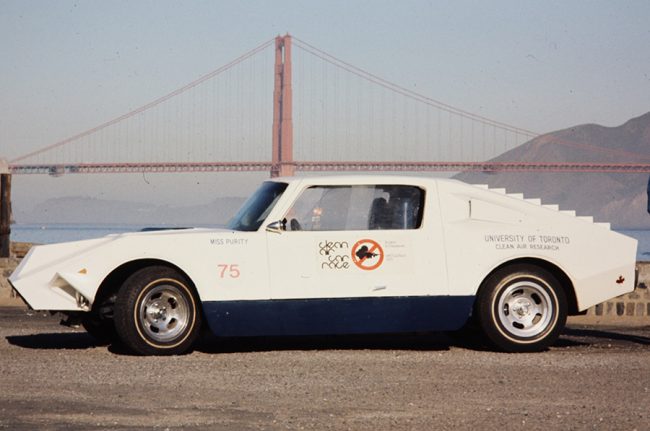 Miss Purity turns 50: Celebrating U of T’s entry into the Clean Air Car Race of 1970

August 24, 2020
Miss Purity — pictured here next to San Francisco’s Golden Gate Bridge — is a hybrid propane/electric car built by a team of U of T Engineering students for the Clear Air Car Race of 1970. The car is being restored for the 50th anniversary of the race. (Photo courtesy Juri Otsason)

Building a car is hard. Building a propane/electric hybrid car from scratch using only volunteer labour in less than six months is, some would say, impossible.

Fifty years ago this summer, Venn led a team of students and professors in designing and building Miss Purity, a low-emission vehicle that competed in the Clean Air Car Race of 1970. The vehicle embodies the creativity, ingenuity, and determination that define the U of T Engineering spirit.

Venn grew up in Toronto and admits to being “car crazy,” as a youth. He built or rebuilt a number of hot rods, vintage and sports cars, entering them in local competitions and even on occasion taking the top prize.

But during his undergraduate engineering program, he started thinking more about alternative vehicles.

“I was following the work of William Lear, founder of Learjet,” he says. “He was experimenting with steam-powered cars, which I thought was just fantastic because a steam engine gives peak torque at stall, and you can use almost any fuel you want.”

Cars running on anything other than gasoline or diesel were a pretty far out idea at a time when public attitudes toward automobiles were very different than they are today.

“If you look at cars of that time, which are vintage cars now, they were really huge,” says Juri Otsason (MechE 7T0, MASc 7T2), another member of the team. “Fuel was cheap. All that mattered was performance.”

That was beginning to change in the late 1960s, as cities such as Los Angeles started to get serious about dealing with smog. Formed primarily from vehicle emissions — including carbon monoxide, nitrogen oxides and unburned hydrocarbons — smog has been linked to respiratory conditions and other health issues.

“In Los Angeles at that time, you often couldn’t see the tops of the buildings through the smog,” says Otsason.

It was in this atmosphere that Venn headed to Detroit for the January 1970 Congress of the Society of Automotive Engineers (SAE). There, he heard Professor Richard Thornton recount the story of the Great Electric Car Race of 1968, which pitted a team of his students at MIT against one from Caltech.

Then Thornton mentioned that he, along with staff and students from Caltech, was planning to organize another such race that summer, one that would be open to any university.

“My ears perked up,” says Venn. “I spoke to Thornton after the talk, and he was very keen to get a team from Canada, because it would open up their national event into an international one.”

Venn headed back to U of T with a mission: to convince his fellow students, along with faculty supervisors, to enter the competition by building a low-emission vehicle from scratch in less than six months.

“A lot of people thought we were crazy,” says Otsason, one of the first students Venn was able to bring on board. Another early convert and enthusiastic supporter was mechanical engineering professor Phil Hughes.

“He was one of the loveliest people I ever met, just like a kindly grandfather,” says Venn. “I remember him saying ‘By Jove, I think this is a smashing idea!’”

It quickly became clear that the steam power concept would be too complicated and expensive given the time constraints. Instead, the team opted for a hybrid design: a combustion engine running on propane — a cleaner-burning fuel than gasoline — coupled with an electric drive system that would be more efficient at lower speeds.

Another key decision was to bring on board Venn’s cousin Ken Bell, then a student at the Ontario College of Art and Design, to create the car’s exterior. The result was striking: Bell designed a sleek, futuristic-looking vehicle, complete with gullwing doors.

“They looked cool, but there was a practical consideration as well in that they left more room for the batteries,” says Otsason. The design eerily anticipated the DeLorean, the vehicle made famous in the Back to the Future films, which was then still years away from production.

Miss Purity began to attract attention almost immediately. Over the next six months, there were what Venn describes as “an increasing number of television appearances, as well as newspaper and magazine articles.”

One of the highlights was a visit from officials from the National Air Pollution Control Administration (NAPCA), the forerunner of the Environmental Protection Agency (EPA).

“To say that they were excited by the U of T project would be an understatement,” says Venn. “They were thrilled, I think because not many of the teams were building cars from scratch the way we were.”

NAPCA even commissioned a short movie to document the Clean Air Race of 1970, narrated by Hollywood actor Orson Welles. Copies are hard to find these days, but Miss Purity features prominently in the film.

The press coverage increased further as the actual race started in August of 1970. Miss Purity turned heads everywhere she went.

“The race organizers had arranged events in every city,” says Otsason. “In Toronto, all the cars went down to city hall, and mayor Dennison came out to meet us. It was really something.”

This archival video from the Associated Press covers the Clean Air Car Race. The Toronto stop is featured from 2:40 to 4:00.

Venn remembers being asked by the race organizers to deliver banquet invitations using Miss Purity to then-governor of Massachusetts Francis Sargent and the mayor of Boston. The deliveries went well, but afterward, the car wouldn’t start.

“The front page of the Boston Globe was taken up by a photograph of Miss Purity being pushed by us,” he says. “The headline read ‘This car doesn’t pollute — not when muscle-powered!’”

The technical glitch wasn’t the only one. Early one morning, about halfway through the race, just outside of East St. Louis, a major breakdown nearly took Miss Purity out completely.

“The engine and most of the electric drive had to be completely torn out,” says Venn. “Luckily, we were close to a very supportive Chevrolet dealership that gave us a bay and provided the necessary parts.”

With their help, the car was repaired the same day. “We put the car back together and drove through the night to catch up with the race in Odessa, Texas,” says Venn. “Nobody could believe it!”

After more than 5,500 km of driving, the race came to an end in Pasadena, California. Miss Purity tied for first place among the hybrid cars, sharing the prize with a team from Worcester Polytechnical Institute, who were driving a modified AMC Gremlin.

Counting the return trip, which went through Vancouver and across Canada back to Toronto, Miss Purity was driven more than 16,000 km. She was sold for one dollar to the National Research Council in Ottawa for a further two years of research work, overseen by another U of T mechanical engineering graduate, Don Buchan.

In the years after the race, Venn partnered with some of the U of T Engineering professors involved to create a spinoff company, Vehicle Research, Ltd., that aimed to build electric vehicles for the consumer market.

“We had the very first three-phase induction, AC-driven electric car in the world, the same kind of drive now used by Tesla,” he says. “Unfortunately, the idea was way too far ahead of its time, and we didn’t have the deep pockets of Elon Musk.”

Venn eventually took a job designing household appliances, but he remained strongly involved in the automotive world through his continued membership in SAE.

In 2015, Venn was speaking to his friend Ron Passer about the project. After watching the movie of the race together, they decided to track down the car and see if it could be restored.

“The vehicle was found in Don Buchan’s front yard in Ottawa, where it had ‘lived’ for a number of years,” says Venn. Passer trailered the car back to his shop in Schomberg, Ont. and separated the body from the chassis.

Both are now being restored in partnership with Plastiglas Industries Ltd. in Ajax, Ont., which was founded by Miss Purity team member and driver, Steve Baker along with his brother Rick Baker just after the race.

For Venn, the legacy of Miss Purity has a lot to do with the community that it brought together.

“If we had thought too much about some of the challenges we would face, it’s possible some of us may have been overwhelmed, but that’s not the attitude we brought,” says Venn. “There’s a lot of capability within the human spirit. Impossible or not, there are times when you just have to do it.”

Fifty years after the Clean Air Car Race, practically all cars are now much ‘cleaner ’than in 1970, with the happy consequence that smog has been greatly reduced in many urban areas.

But pollution is still very much with us, and rising atmospheric concentrations of CO2 remain a challenge, one which Otsason believes still resonates with the story of Miss Purity.

“It drove home the point that there are ways of dealing with the problems we face in terms of pollution or emissions,” says Otsason. “I think she inspired people to look for alternatives, and we’re still doing that today.” 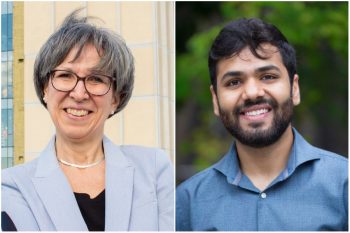