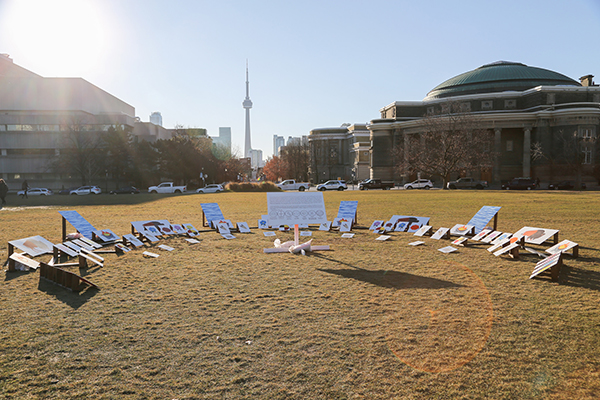 Missing and murdered Indigenous women, girls and two-spirit people honoured with monument on U of T campus

To mark the National Day of Remembrance and Action on Violence Against Women, U of T Engineering students designed and constructed a memorial to honour missing and murdered Indigenous women, girls and two-spirit people.

The installation features a series of painted panels arranged in concentric circles, a powerful structure in many Indigenous cultures, depicting images with symbolic significance to Indigenous people and representative of Indigenous women. The symbols include buffalo, eagle feathers, flowers, water, baskets, medicine wheels, and qulliq (or oil lamps).

Constructing this monument is something Joshua Calafato (Year 4 EngSci), a member of U of T Engineering’s Blue & Gold Committee, says he has been considering for more than a year.

“It’s been on my mind, and I wanted to raise awareness within the U of T community,” said Calafato. “This tragedy is both systemic and individual — it affects people, families and communities, and it’s ongoing. It needs to end.”

“The students wanted to do this, but not if they didn’t have representatives from the Indigenous community involved,” said Bazylak. “For me, intent is critical — the students were very cautious and I was proud of how they approached it. They didn’t want to impose their own views.”

Calafato also discussed his idea and motivations with Susan Blight, Aboriginal Student Life Coordinator with U of T student services and an artist herself. “I wanted to make sure we were doing this justice,” said Calafato. “She advised me to have my heart open, and keep it simple.”

The National Day of Remembrance and Action on Violence Against Women takes place each year on Dec. 6 to commemorate the 1989 massacre at École Polytechnique in Montreal. Twenty-eight people were shot and 14 women killed, most of whom were engineering students at the university.