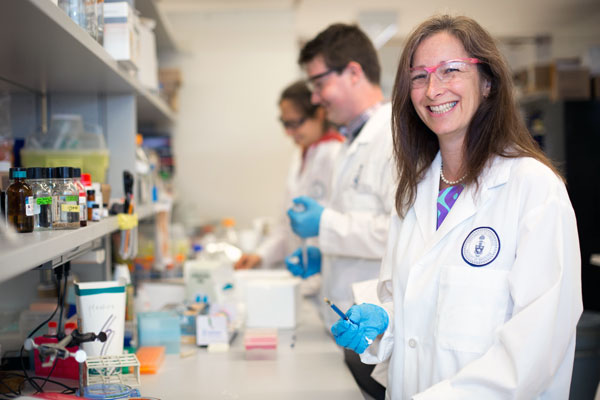 University of Toronto engineering professor Molly Shoichet (ChemE, IBBME) has received the 2015 Fleming Medal and Citation from the Royal Canadian Institute in recognition of her outstanding contributions to the public understanding of science.

Among her many science outreach activities, in May Shoichet founded the groundbreaking initiative Research2Reality (R2R), which uses digital media to communicate cutting-edge research performed in Canada and spark nationwide awareness. R2R hosts more than 70 short videos featuring some of the country’s top research scientists and engineers describing their work in accessible terms. The initiative has garnered more than 1,000 social media followers in five months.

A world-renowned expert in tissue engineering and regenerative medicine, Shoichet holds a Canada Research Chair in Tissue Engineering and is a University Professor, the highest academic rank at the University of Toronto. She also serves as the senior advisor on science and engineering engagement to U of T President Meric Gertler.

Learn more about Shoichet’s research and other achievements

“Research is the heart of invention, invention leads to innovation, and innovation is the core of our future,” said Shoichet, who was also named one of five 2015 L’Oréal-UNESCO for Women in Science Award Laureates from around the world earlier this year. “This is an opportunity to use modern communications tools to ignite a national discussion and inspire the next generation of researchers to invent the future.”

“On behalf of our Faculty, I want to congratulate Professor Molly Shoichet on this tremendous honour,” said Dean Cristina Amon. “As a world-leading researcher and educator with a remarkable record of innovation and discovery, she is an exemplary ambassador for the vital importance and impact of scientific research on our society, our well-being and our future prosperity.”

Research2Reality is supported by six research-intensive universities to date, along with the Ontario government and Discovery Science Channel, where some of the videos are televised.