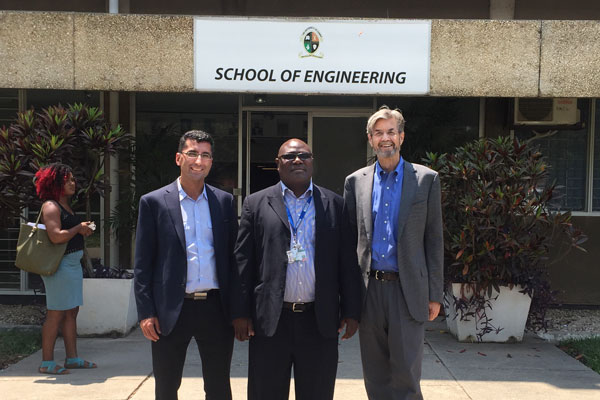 Today, seven of the world’s 100 largest cities are in Africa. But by 2050, population models predict that this will rise to 21, and eventually reach 40 by the end of the century. By then, Africa will be home to five of the world’s ten largest cities, each with more than 50 million residents. That’s why U of T Engineering postdoctoral researcher Nadine Ibrahim (CivE) is delivering lectures to students half a world away.

Educational tools such as massively open online courses (MOOCs) offer a way for Ibrahim and her colleagues to share their expertise in sustainable cities with the students who will lead African cities through the coming transformation.

“There is a lot of infrastructure to be built, and a lot of engineers will be required to build it,” says Professor Murray Metcalfe, who is Professor, Globalization at U of T Engineering and the project director. “That creates a tremendous opportunity for African leaders to drive development that happens in a way that is sustainable, both economically and environmentally.”

Earlier this month, Ibrahim and her colleagues used an online platform to deliver a course on sustainable cities to a group of students at the African Leadership University in Mauritius, an island nation in the Indian Ocean. Instructors were spread across four locations — Toronto, Oshawa, Boston and Mauritius — and at one point the students had to deal with torrential rains that kept them confined to their dorms, but the pilot project was deemed a success.

The three-day course served as the first test of the team’s larger and more ambitious goal: to develop scalable online courses that will help prepare the next generation of engineering leaders building sustainable cities across the entire African continent.

Ibrahim is adapting material from a course she teaches to undergraduate and graduate students at U of T: CIV 577 Infrastructure for Sustainable Cities. “The course challenges students to design an urban area, such as the port lands of Toronto, through to the year 2050,” she says. “This year students selected eight cities, including Cape Town and Dar es Salaam. It was very successful, and allowed us to see that this would work with students around the world.”

The team has spent the last several months laying the groundwork for a strong network of local partners across the African continent. Last summer, Ibrahim and PhD candidates Kirstin Newfield (CivE) and Antoine Despres-Bedward (OISE) travelled to institutions in Kenya, Rwanda and Uganda. They also attended a conference organized by the African Virtual University, an online-only institution based in Dakar, Senegal and Nairobi, Kenya.

A few months later, Metcalfe and research associate Rahim Rezaie followed up with a trip to institutions in Zambia, South Africa, Ghana and Ethiopia, and participated in the African Engineering Education Association Conference.

“Everywhere we went, we looked at the student populations and the online capabilities,” says Ibrahim. “We tried to imagine what a virtual global classroom, and eventually a virtual lab, would look like. Everyone we talked to was excited about the project.”

Among other collaborators on the project are Professor Brent Sleep (CivE), who is the principal investigator on a Connaught Global Challenge Award grant that will fund various aspects of the project, Professor Greg Evans (ChemE) and Professor Dan Hoornweg (UOIT and adjunct in CivE). The team has also received support from the Dean’s Strategic Fund and the U of T Learning and Education Advancement Fund (LEAF).

Building on the success of the pilot course, the team is now working on the first two small private online courses (SPOCs) they plan to deliver starting in early 2018. Involving academics at African partner universities in co-developing the course content is central to the team’s approach. The courses will be a mix of live instruction, recorded lectures and assignments that can be completed online.

Metcalfe says that the rapid pace of growth in Africa offers a chance to leapfrog over some of the technologies that have hindered sustainability in the developed world. “The analogy everyone points to is cell phones,” says Metcalfe. “In India and Africa, they have skipped right over land lines and elaborate telecom switches to something with a smaller footprint. We think African cities can do something similar in urban infrastructure.”

But for Ibrahim, the most inspiring part has been the students. “Whatever the challenges, they make it work,” she says. “Their hunger for knowledge is very motivating.”