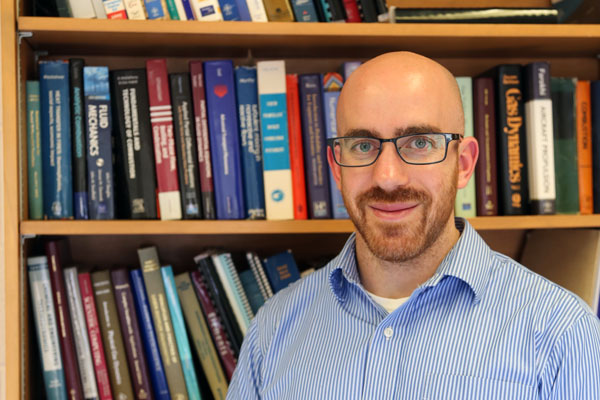 “It’s a very big honour,” said Steinberg. “It’s a great encouragement to keep working on interesting problems, and it will open a lot of doors within the combustion community for future research collaborations.”

Steinberg’s team studies the complex physical and chemical reactions taking place inside the combustion engines used in jet aircraft or large power plants. He likens the challenge to that of trying to keep a match lit inside a hurricane. “The conditions that you find inside of a jet engine are actually much more violent than you find in a hurricane,” he said. “We can keep the match lit, but challenges arise when we want to minimize pollution, use biofuels, or push to even more extreme conditions, all without compromising safety or robustness.”

Re-designing engines to meet those needs tends to compromise the stability of their operation, for example, by introducing vibrations that can damage engine components. “One of the questions that we try to answer is: how can you make low-emissions systems safe enough for aerospace?” said Steinberg.

A key part of Steinberg’s research is using advanced laser measurement systems to “see” what’s going on inside the engine during operation. “When people ask me what I do, I say that I shoot lasers into jet engines,” he said. The techniques developed by Steinberg and his team offer new insight into the physics and chemistry of combustion, which in turn could help manufacturers and engineers understand and ultimately improve engines. The team’s industrial partners include General Electric, Pratt & Whitney Canada and Siemens Canada.

“This prestigious international award is well deserved, as Professor Steinberg is conducting research in combustion that is widely recognized as outstanding and important,” said Professor David Zingg (UTIAS), director of the University of Toronto Institute for Aerospace Studies. “The award is also a reminder that Canadians in general, and University of Toronto professors in particular, can and should compete at the highest levels internationally.”

“On behalf of the Faculty, I warmly congratulate Professor Steinberg on this award,” said Professor Ted Sargent (ECE), vice-dean, research at U of T Engineering. “His research into the fundamentals of combustion will help improve the sustainability of the aerospace and power industries, both here in Canada and around the world.”

The inaugural Hiroshi Tsuji award will officially be presented August 4 at the 36th International Symposium on Combustion in Seoul, Korea.