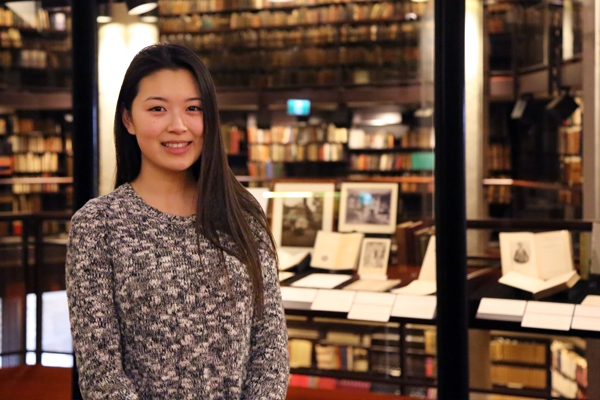 As a first-year student in U of T Engineering, Jennifer (Yewon) Son never imagined that she and her classmates would come to the rescue of hundreds of thousands of priceless works of literature.

“We came up with some crazy plans, and then tried to make them implementable,” remembers Son. “To think that something we did as first-year students is actually being put into action — I was amazed.”

Son is one of six students who designed a way to prevent rising humidity levels in the University of Toronto’s Thomas Fisher Rare Book Library for a first-year assignment in 2014. Now, three years later, retrofits to the library inspired by that assignment are underway.

The Fisher Library is a purpose-built wing of the Robarts Library that houses rare book and archival material dating back to 1789 B.C., much of which can be seen in the towering stacks that line the interior walls. The Fisher is the only library in Canada to count all four of Shakespeare’s 17th century folios among its collection — the first folio is one of only 234 known copies in the world.

In 2004, the library’s insulation began to fail. On days when the temperature outside dropped below -20 C, the cold transferred through the concrete, causing condensation to form between the building’s inner and outer walls. Despite the Fisher’s preservation-quality HVAC system, the additional moisture caused rising humidity levels and created conditions for mold, a serious threat to the collection.

“Mold forming on the collection can damage it, and once it happens, it will always happen,” said John Toyonaga, Manager of the Binding Section and head of disaster planning for the library. “Controlling the environment is key to keeping the collection safe.”

Between 2004 and 2013, Toyonaga and Fisher Library staff consulted with building engineers, property managers and architectural firms — all recommended that the library be reinsulated from the inside. This would require removing the entire collection to a safe, climate-controlled space, then moving it back after the installation. Each move would risk damage to the collection, and the library would have to close during the moves and renovations. Adding an additional level of complexity, the Robarts Library is a listed heritage property by the City of Toronto — this meant that any solution had to preserve an exterior appearance consistent with the building’s 1973 aesthetic. “We were in a tough situation,” recalls Toyonaga.

Running out of options, he and his team turned to the Faculty of Applied Science and Engineering and its first-year Engineering Strategies and Practices (ESP) course.

“It’s a learning course, and the primary foci are on design and communication,” said Professor Jason Bazylak (MIE), who has coordinated the course since 2009. “The final report they submit should be sufficient that the client can implement their work with minimal additional engineering input.” Spanning fall and winter terms, the course introduces students to the engineering design process before assigning them challenges presented by real clients from industry and the community.

Through collaborative group work and ongoing consultations with their clients, students identify client needs, develop a number of solutions, find the strongest one and present it to their client. Son and her classmates Michael Lancaster, Jackie Lunger, Toby (Yishun) Ou, Alice Wolfe and Tom Zhang were assigned the Fisher Library as a client in January 2014.

“I was excited when I first read the problem statement for the project,” says Lancaster. “You don’t often get the opportunity to work on a project with a significant real-world impact in a university course.”

The team explored more than 50 ideas before settling on their final solution: installing a heated envelope and insulated external surface over the existing concrete, with a finishing layer that replicates the current appearance.

After submitting their final proposal in April 2014, the team continued on with their studies but Toyonaga and library administration moved the project forward. Over the next two years, the concept to repair the building from the outside received approvals from the University’s administration and architectural firms were brought in to draft models and ensure the idea would work. After adjustments to the design, in November 2016 — nearly three years after the students were first assigned the project — the retrofits to the Thomas Fisher Rare Book Library began. Construction is scheduled to be complete in March 2017.

“They approached it as a project and got a great learning experience, and we got an elegant solution,” said Toyonaga. “Some of the brightest minds in the city are just down the street — our answer was there all along.”