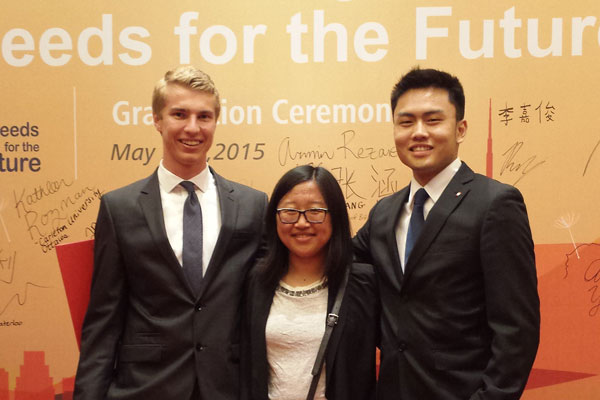 Seeds for the Future: Three U of T engineers on exchange in China

December 16, 2015
Eric Flim, Alice Ye and Raymond Ly are three U of T Engineering students who were selected for Seeds for the Future, a technology and cultural exchange program offered by Chinese telecom company Huawei. (Photo: Huawei)

This story is Part 4 of an eight-part series, Global Engineering Impact, running throughout fall 2015.

Three U of T Engineering students enhanced their technical skills and immersed themselves in Chinese language and culture last May as part of an exchange program organized by Huawei, one of the world’s largest telecommunications companies.

The three were among 20 engineering students chosen from across Canada to participate in the Seeds for the Future Work Experience Program, which took them from the company’s Canadian headquarters in Markham, Ontario, to Beijing and Shenzhen over the course of two weeks.

“I thought the opportunity was incredible,” said Raymond Ly (Year 3 EngSci). “It was a chance not only to visit China for the first time, but also to get a tour of a company at the forefront of technological advancement.”

The trip began at Huawei’s Canadian headquarters in Markham, where the students toured the facilities and got to know one other. “We came from all across Canada, with very different backgrounds,” said Ly. “Some of us spoke French, and a few of us were Chinese. Over the trip, I grew to know and bond with everyone.”

Alice Ye (ECE 1T5) also enjoyed the social aspect of the program. “It was great getting so close to a group of people, and we were pretty good friends by the end of it,” she said.

The next day, the group flew to China. They spent the first week at Beijing Language University, learning Mandarin and taking classes in Chinese culture. Although some of the students could already speak the language, most were beginners. “Our teachers often found great humour in our inability to even make the most basic sounds,” said Flim with a laugh. The students also studied calligraphy and painting and visited many landmarks, including the Silk Market, Tiananmen Square, the Forbidden Palace and the Great Wall of China.

During the second week, the students travelled to Shenzen, home of Huawei’s main campus. They attended daily lectures on topics such as the “Internet of Things” and next-generation communications networks. They also participated in hands-on projects in the company’s advanced computer labs and practiced presenting their ideas to a business audience.

Flim credits his studies at U of T Engineering for preparing him for the technical aspects of the program. “I was at a different school in a different country and yet I was on the same page as the instructors there,” he said. “It gave me a sense of how immune technology is to a lot of the cultural barriers that limit other professions.”

Some of the most memorable moments came outside the classroom when the students attempted to use their new command of Chinese to interact with locals — not always successfully. They recounted trying to order a scorpion dish, and being directed instead to a shoe store.

For Flim, who grew up in a rural area east of Toronto near Kendal, Ontario, being immersed in a new culture was a profound experience. “China is different,” he said. “Looking at your country from the outside is always fascinating because you feel like you’re learning about yourself and what you look like to other nations.”

“If breaking down cultural barriers was the goal of the program, it was successful. They made us feel more connected with the rest of the world, and they made us more powerful by demystifying a place like China,” said Flim. “I’m very thankful for the experience I had with them.”

All three students say their experiences will stay with them in their future careers. Ly plans to pursue graduate studies in electrical engineering, and Ye is already doing so at the University of California, Berkeley. Flim is less certain about his path, but said the exchange has opened exciting new doors.

“It made me more brave about following risky or unknown paths. I’m no longer motivated to just take the safest route. Instead, I’m eager to find and consider as many options as I can.”