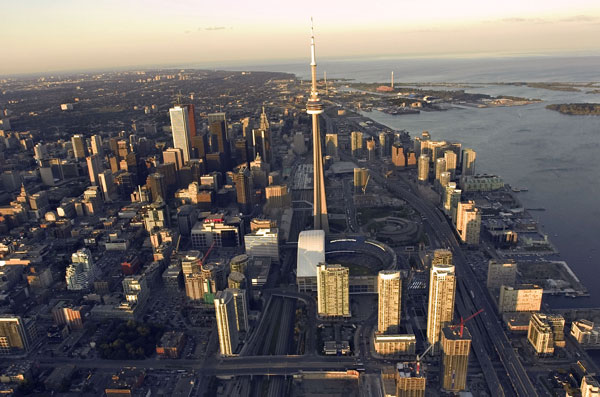 December 15, 2017
Professor Alberto Leon-Garcia (ECE) and his partners aim to use data to improve the efficiency and livability of cities such as Toronto. (Photo: City of Toronto, via Flickr)
Data Analytics & Artificial Intelligence

From traffic cameras to real-time transit schedules, cities produce gigabytes of data every day. A new partnership between U of T Engineering, École de technologie supérieure (ETS) of Montréal and a number of municipal governments aims to leverage this data to make cities cleaner, greener and more liveable.

“In the last few years, there’s been a real explosion in the amount of data being gathered across our cities,” says U of T Engineering Professor Alberto Leon-Garcia (ECE). This data comes from a variety of online devices — such as smartphones, internet-enabled vehicles and CCTV cameras — known collectively as the Internet of Things (IoT).  “The challenge now is to convert that data into useful insight. Our team is leveraging analytics and machine learning to extract this intelligence.”

He gives the example of Google Maps, which uses anonymous location data from smartphones to estimate traffic flow on busy streets. “That’s data from just one source,” he says. “If we then layer in data from weather stations, parking meters, green buildings or ride-sharing apps, the potential benefits begin to multiply.”

Read more about the Connected Vehicles and Smart Transportation (CVST) portal created by Professor Leon-Garcia and his team.

More than 60 delegates attended, representing more than a dozen potential partner organizations. These included a broad array of companies such as Ericsson, Ciena, IBI, Phillips Lighting, Hatch, Deloitte, Parsons and WSP, transportation agencies including TTC, MTO, Metrolinx, and Waterfront Toronto as well as the municipal governments of Montréal, Toronto, Vaughan and Newmarket.

Keynote presentation showcased smart cities initiatives taking place around the world. For example, David Graham of San Diego described that city’s new IoT platform, which features 3,200 intelligent sensor nodes and is designed to help optimize traffic and parking, as well as enhance public safety, environmental awareness and overall livability for residents. Afterwards, the participants broke out into groups to identify similar opportunities within their own jurisdictions.

“We’re in a very exciting period where people from many different backgrounds are starting to see the value of this kind of approach,” says Leon-Garcia.

He points to the Canadian government’s Smart Cities Challenge, issued just last month. The competition will award up to $50 million to collaborations between communities, businesses, academia, and civic organizations that improve the lives of their residents through innovation, data and connected technology.

“The rise of smart cities is a great example of how engineering innovation, combined with multidisciplinary collaboration, can improve lives for people around the world,” said Cristina Amon, Dean of U of T Engineering. “Our Faculty has a strong track record in this area, and I look forward to the results of this exciting new collaboration.”

Read more about Smart Cities research at U of T Engineering