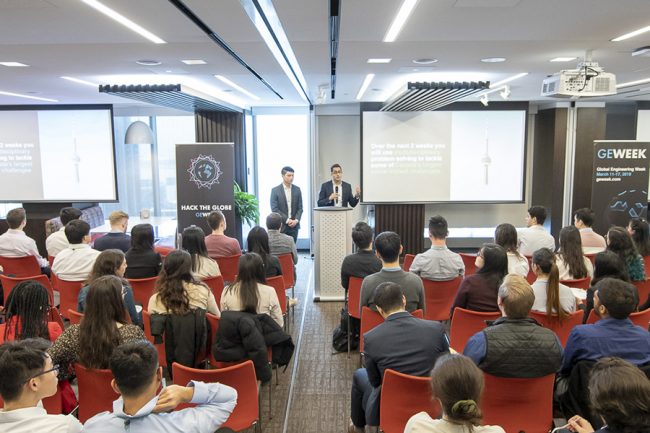 From March 11-17, Global Engineering Week (GE Week) will challenge students at U of T Engineering and across Ontario to think critically about how they can make a difference on the world stage.

Complex global issues — from climate change to accessible health care — affect all of humanity. These challenges require multidisciplinary teams of engineers who can think beyond the technical aspects of the problem, says GE Week founder Malik Ismail (EngSci 1T6 + PEY), who is now an associate at the Boston Consulting Group (BCG).

“We want to expose engineering students to solving problems in non-traditional contexts, whether it’s solutions to a complex issue in the developing world, or in Northern Canada,” he adds. “There are socioeconomic implications, financial implications and unique circumstances based on your local stakeholders — a well-rounded engineer, one who makes a positive difference, would be mindful of all of these aspects.”

This year, Ismail is working with the Centre for Global Engineering (CGEN), the U of T Engineering chapters of Engineers Without Borders (EWB), Women in Science and Engineering (WISE) and the Sustainable Engineers Association (SEA) on GE Week at U of T. They have also partnered with leading tech companies and NGOs, including Google, LEAP and BCG.

Events during GE Week at U of T include a speaker panel on the role of artificial intelligence in global development, hosted by Professor Timothy Chan (MIE), as well as a student hackathon, Hack the Globe, which kicked off on March 2 and will continue March 16-17.

“The hackathon is the first social-impact hackathon of its kind in Canada and emphasizes multidisciplinary challenges outlined in the Google Impact Challenge,” says Ismail, who now works at BCG. Participants include students from engineering, computer science, business, health sciences and the arts.

GE Week events has also expanded to three other universities this year: University of Waterloo, Concordia University and Western University. “We’ve experienced three times the growth since I started GE Week three years ago. This year, we’re excited to have the opportunity to engage nearly 10,000 engineering students across four universities through immersive and hands-on events,” says Ismail.

“Coming into university, I had set out to make a positive, significant impact as a student,” says Lu. “Planning GE Week was an opportunity to do that.”

Lu is excited to see his fellow engineering students and the broader U of T community become inspired and re-think what it means to be an engineer.

“Many of us throughout our engineering education become fixated on honing our technical skills without truly tapping into our potential of doing more, or of thinking more broadly about social issues,” he says. “I want to see a future where the norm for engineers is to be global thinkers — leaders who can build and scale a project, from grassroots to global.”