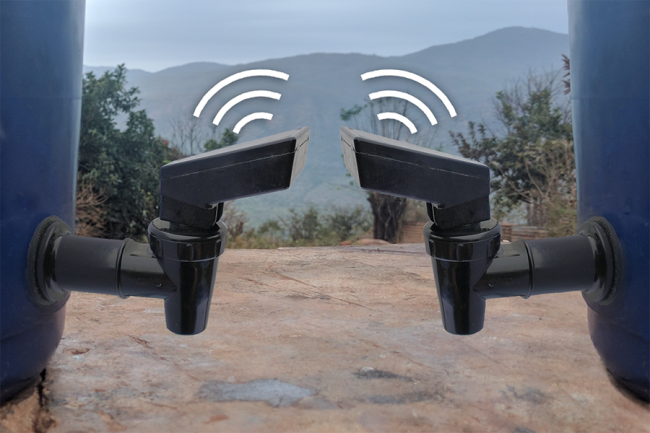 June 17, 2021
SmartSpouts — low-cost sensors embedded in these water filters — can track when and for how long the spigot is open. More than 200 of them have been successfully deployed in a radomized controlled trial in South Africa's Limpopo Province. (Photo: David Meyer)
Water

A sensor known as the SmartSpout, designed in part by U of T Engineering professor David Meyer (CivMin, ISTEP) has been successfully deployed in a large-scale field trial in South Africa’s Limpopo Province.

The results, published in Environmental Science & Technology, showcase the power of rich datasets gathered by low-cost sensors to improve public health by helping governments and development agencies hone in on both technological and social interventions that have the greatest impact.

“Let’s say you want to improve drinking water quality, so you distribute a whole bunch of household water filters,” says Meyer. “Well, if nobody is using the filters, they don’t help anyone. Understanding usage — who is using them, when, how consistently, and why or why not — is critical to designing more effective interventions.”

One way to determine usage is through surveys. But just as with any type of poll, responses given by the participants don’t necessarily match their behaviour.

“When you go to the dentist, you probably claim you floss every day, whether or not you actually do,” says Meyer. “One of the big advantages of a sensor is that you can learn about what people are actually doing.”

The development of the SmartSpout started about eight years ago, when Meyer and one of his co-authors, Professor Natasha Wright of the University of Minnesota, were both graduate students at the Massachusetts Institute of Technology.

“We were taking the same civil engineering graduate course, taught by Professor Susan Murcott,” says Meyer. “She had had this idea for a new kind of sensor, and when she found out we were both mechanical engineers, she asked us if we could build a prototype.”

Meyer and Wright have been working together on this project ever since.

The idea was simple: the sensor would attach to the spigot of a water container equipped with a purification technology, such as a filter or chemical tablets. Using an accelerometer similar to that found in most smartphones, the sensor would detect and log how long the spigot is held open for and at what time.

While the SmartSpout is not the first sensor designed to track the usage of such interventions, it distinguishes itself from the competition by its simplicity and low cost.

Using an accelerometer rather than a flow meter that directly measures how much water is flowing was one cost-saving innovation. Another was the use of near-field communication, rather than technologies such as Bluetooth or Wi-Fi.

Together, these two design changes reduce power consumption and enable the sensor to be about one-tenth the cost of comparable products.

A year later, the team collected data from 232 households in Limpopo Province. Households received one of three types of water storage containers: one containing a water filter, one containing tablet that released antimicrobial silver ions, and one without either of these two technologies.

The findings confirmed that surveys are not very accurate: they overestimated consistent usage by 53 percentage points when compared with the sensors.

“We found this huge range, from households that use it every single day, to households that almost never use it,” says Meyer. “This is important when you consider what other teams have shown, which is that even if you use the filter 90% of the time, you’re only getting 4% of the health benefits. So consistent use is key.”

It only takes one drink of contaminated water to become infected with a pathogen. And the more times that happens, especially early in life, the more likely it is to lead to chronic effects, such as damaged tissue in the intestines that can lower nutrient absorption and lead to other health effects, such as stunting.

Rather than try to patent the design of the SmartSpout, Meyer and his collaborators have decided to leave it in the public domain. Their hope is that other groups — including development organizations and even potentially the companies that manufacture water filtration devices — take the idea and run with it.

“I like the idea of use-it-or-lose-it schemes, where you can tell if the water treatment device is being used, and if it’s not, you can give it to someone else,” he says. “To do that, you need sensors that are cheaper than the devices themselves. With the SmartSpout, we’re roughly at cost parity, so it’s a big step toward being able to deploy these everywhere.”