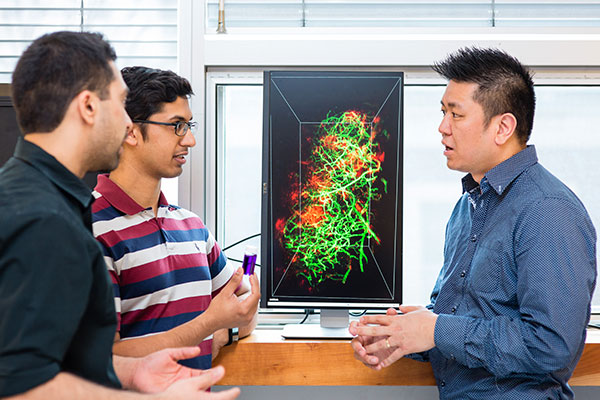 May 11, 2016
Shrey Sindhwani, Abdullah Syed and their supervisor, Professor Warren Chan, have modified and improved a technique to turn organs transparent, allowing them to track the locations of nanoparticles in the body. (Photo: Neil Ta)
Human Health

U of T Engineering researchers have modified and improved a technique that makes tissue from kidneys, livers and other organs nearly transparent under a microscope. This advance will allow them to better track how nanoparticles — tiny particles that can be injected into patients to deliver medicine or enhance medical imaging — travel through the body, and has the potential to improve the diagnosis and treatment of diseases such as cancer.

“It was kind of like taking off a blindfold,” says Shrey Sindhwani, an MD-PhD candidate in the Institute of Biomaterials & Biomedical Engineering (IBBME) and the Faculty of Medicine. “When we know more about which type of cell is taking up which kind of nanoparticle, we can ensure we are using the right drug for the right application.”

Sindhwani and Abdullah Syed (IBBME PhD candidate), supervised by Professor Warren Chan (IBBME), are co-lead authors on a paper which recently made the front cover of ACS Nano. The paper outlines their technique for turning organs transparent, and demonstrates its usefulness for the emerging field of nanomedicine.

For the last decade, researchers around the world have been examining the potential to use nanoparticles to treat cancer by delivering drugs directly to cancer cells while leaving healthy cells alone, or lighting up specific organs and tissues in medical scans. However, a recent survey of the field by Chan and co-workers showed that fewer than one per cent of nanoparticles actually reach their intended target.

To better understand how nanoparticles interact with the body, the team injects them into mice, and then examines their tissues and organs with microscopes. “With current techniques, you can either see the whole organ, but without really knowing the details about what’s happening inside, or you can look at a single tissue slice in detail, but you lose contextual information,” says Sindhwani. “Our technique captures both perspectives with high resolution, producing a 3D map that can be zoomed in and out, like a Google Earth for the body.”

Sindhwani and Syed built their new method on a technique called CLARITY, originally created for studying brain tissue. “People have used this technique to make tissues transparent, but we didn’t know it if would work with nanoparticles,” says Syed.

The process starts by injecting the tissue with an acrylamide hydrogel, a substance chemically similar to the water-absorbing compounds found in diapers. The hydrogel bonds all proteins together, preserving the structure of cells and tissues. However, the gel doesn’t bond lipids, which are fat-like molecules that give tissues their opacity. Ordinary detergent is used to wash the lipids away, leaving transparent tissue ready for the microscope.

This video shows a series of 3D scans from a transparent liver produced by the new technique. Nanoparticles are in green, while the cell nuclei and blood vessels are in blue and red, respectively. (Video Production: American Chemical Society (ACS))

The team found that nanoparticles embedded in the tissues were not washed out with the lipids, but rather held in place by the cross-linked proteins. This allowed researchers to see where nanoparticles ended up in great detail. For example, in the liver, “We see the nanoparticles stay near the vessel,” says Sindhwani. “Now that we know which cells are taking which nanoparticles up, we can appropriately target or deliver drugs for that cell type.”

Moreover, by tweaking certain parameters — such as temperature or concentration of detergent — the team was able to further optimize the process, making it faster and more efficient at handling many samples. “The original technique would take about a month to clear one sample,” says Syed. “We can do 48 tissues simultaneously in about 7 days.”

The technique is already being adopted by other labs. U of T Engineering Professor Michael Sefton (ChemE, IBBME) and his team are using it to investigate materials that promote new vessel formation. These vessels are needed for the tissue engineering of new organs which need the blood vessels to supply nutrients.

“The advantage of this process is that we could use the technique to study multiple diseases and conditions beyond cancer,” says Chan. “Nanoparticles have many potential applications in medicine, so we hope this technique will be adapted by researchers and clinicians in a number of different fields.” 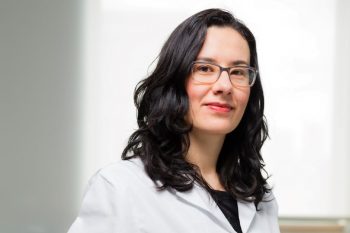 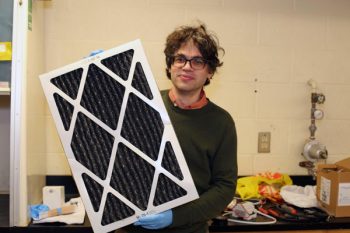