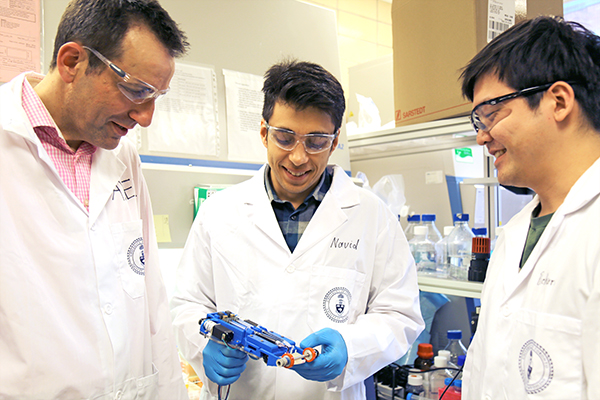 U of T Engineering researchers have developed a handheld 3D skin printer that deposits even layers of skin tissues to cover and heal deep wounds. The team believes it to be the first device that forms tissue in situ, depositing and setting in place in two minutes or less.

Their research, led by Navid Hakimi (MIE PhD candidate) under the supervision of Professor Axel Guenther (MIE, IBBME), and in collaboration with Dr. Marc Jeschke, director of the Ross-Tilley Burn Centre at Sunnybrook Hospital, was recently published in the Journal Lab on a Chip.

For patients with deep skin wounds, all three skin layers — the epidermis, dermis and hypodermis — may be heavily damaged. The current preferred treatment is called split-thickness skin grafting, where healthy donor skin is grafted into the surface epidermis and part of the underlying dermis.

Although a large number of tissue-engineered skin substitutes exist, they are not yet widely used in clinical settings. “Most current 3D bioprinters are bulky, work at low speeds, are expensive and are incompatible with clinical application,” explains Guenther.

The research team believes their in-situ skin printer is a platform technology that can overcome these barriers, while improving the skin-healing process — a major step forward.

The handheld skin printer resembles a white-out tape dispenser — except the tape roll is replaced by a microdevice that forms tissue sheets. Vertical stripes of “bio ink,” made up of protein-based biomaterials including collagen, the most abundant protein in the dermis, and fibrin, a protein involved in wound healing, run along the inside of each tissue sheet.

“Our skin printer promises to tailor tissues to specific patients and wound characteristics,” says Hakimi. “And it’s very portable.” The handheld device is the size of a small shoe box and weighs less than a kilogram. It also requires minimal operator training and eliminates the washing and incubation stages required by many conventional bioprinters.

The researchers plan to add several capabilities to the printer, including expanding the size of the coverable wound areas. Working with Dr. Jeschke’s team at Sunnybrook Hospital, they plan to perform more in vivo studies. They hope that one day they can begin running clinical trials on humans, and eventually revolutionize burn care, though Professor Guenther says estimating a realistic timeline remains challenging.

“Several steps are needed, but we are confident we will get there,” says Guenther. “My lab, and Dr. Jeschke’s lab, are committed to developing the technology. We have a clear goal of getting this to a stage of routine clinical application.”