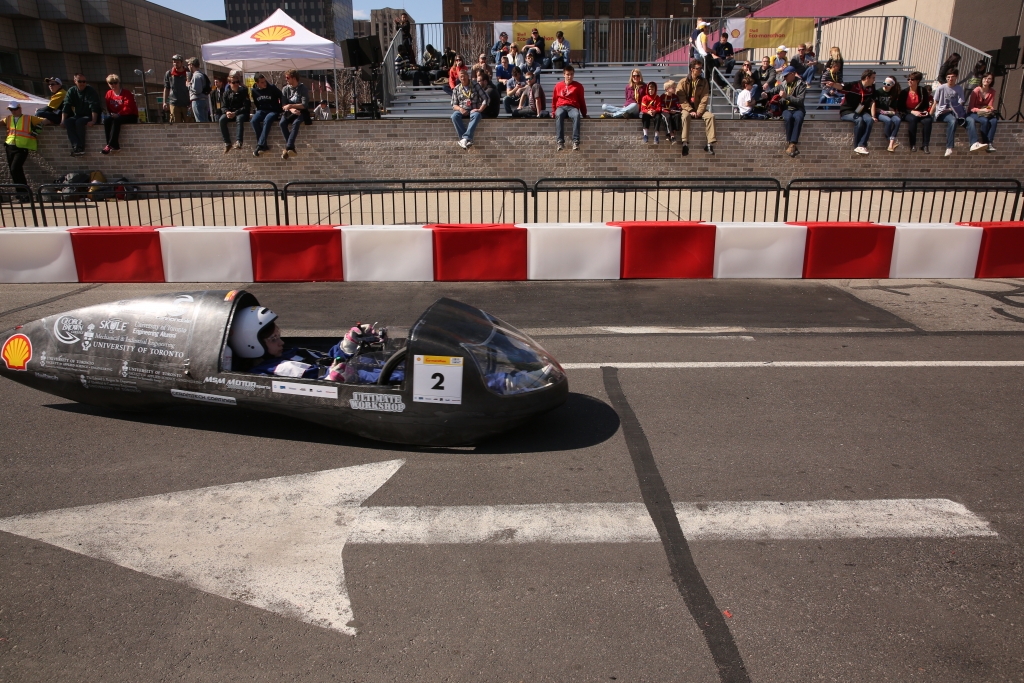 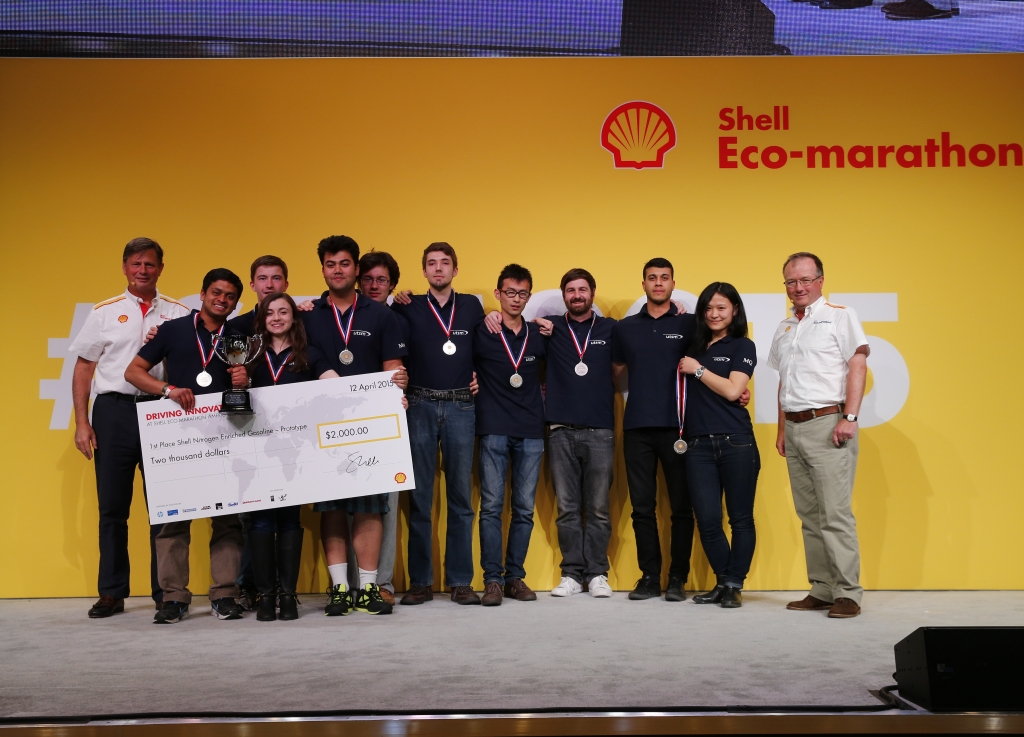 Eighty-nine engines revved in Motor City this weekend, but they weren’t racing for gold—they were racing for green.

The University of Toronto Supermileage team won this year’s Shell Eco-Marathon Americas in Detroit, Michigan, with an efficiency of 3,421 miles per gallon—the equivalent of 6.82 millilitres of gasoline per 10 kilometres. That’s less than five tablespoons of gas to drive from the foot of Yonge Street in Toronto to Barrie, Ontario.

U of T squeaked out a win in the very last run of the event to upset the dominant Al Erion team from Université Laval. A perennial favourite, Laval took home the title at the past two events, and five out of six previous years in the highly competitive Prototype Gasoline category.

“Even on that last run I don’t think most of us believed we would come in first, we just thought we might improve,” says Mengqi Wang (ElecE 1T3, MASc 1T6), co-president and electrical lead of the Supermileage team. “It was literally the last possible moment—we were the final car on the track—and we just sneaked past them.”

The surprise win couldn’t have been more dramatic: the team thought they’d had their last run around the 1.4-kilometre track, and were in the fuelling tent having their gas consumption measured and logged with only five minutes left before the track was slated to close.

“We’d already done media interviews about coming in second, and being happy about improving on last year’s performance,” says Prashanth Murali (MechE 1T3+PEY, UTIAS MASc 1T6), the team’s mechanical lead credited with designing and fabricating a much lighter aerobody for this year’s 34-kilogram vehicle. “We were resigned to our fate.”

Then they realized there were only two cars in line at the start. “The official at the start line told us if we lined up right now we could get another run in,” remembers Wang. “We sprinted back to the tent and dragged the car over.”

They finished the run and went back in the fuel tent to measure the vehicle’s temperature and consumption, but because they were the very last car, they had to wait for the official rankings. “We could tell our consumption was low, but we didn’t know where we’d placed,” says Wang. “Half the team was screaming, half the team was trying to get us to calm down.”

This is the third year the Supermileage team has competed in the Shell Eco-marathon, each time in the Prototype Gasoline class, the biggest category at the two-day event. In 2014 they came second after jockeying for the lead with Laval all weekend. “We were neck and neck with them the entire competition,” says Wang. “We knew exactly what we needed to do to get the extra mileage, but we just couldn’t get the last run in.”

That year the team also won a technical innovation prize for their custom-built engine, the only custom engine in the entire competition. They hope to continue to improve on their engine, as well as perfecting a reliable clutch and making improvements to the vehicle’s aerodynamics, including wind-tunnel testing. Wang says the team also has plans to break into the Battery Electric category.

Founded in 2013, the Supermileage team is composed of 25 undergraduate and graduate students from U of T Engineering, and is supervised by Professor Kamran Behdinan (MIE) of Mechanical & Industrial Engineering. Wang and Murali both say they can’t wait to realize the many improvements they have in store for next year’s Eco-marathon—the competition returns to Detroit in 2016, where they hope to defend their title on the same track.

“The Supermileage Team is comprised of dedicated, multidisciplinary students, committed to the success of the team,” says Professor Behdinan. “As the faculty advisor, I had the privilege of knowing the team’s realistic objectives to go beyond  last year’s great success, and achieve first rank in the competition.”

“Our actual goal is to beat the North American record and see how far we can push the record,” says Wang. “All of us were a little disappointed by how close we were with Laval—just like last year, either team could have won. So the goal for us is to really set the bar for the field.”

The international event, which celebrated its 30th anniversary this year, drew 113 teams from more than 1,000 universities and high schools across the Americas, including participants from Brazil, Guatemala, Mexico and the United States. In addition to gasoline, teams entered futuristic vehicles running on diesel, ethanol, electricity, compressed natural gas, gas-to-liquid fuel and hydrogen power. Teams competed for awards in best fuel economy, safety, design and team spirit.

“In Detroit, I was amazed by our team’s excellent engineering execution under the extreme pressure of a tough competition,” says Behdinan. “I would like to congratulate all of them for their remarkable achievement.”