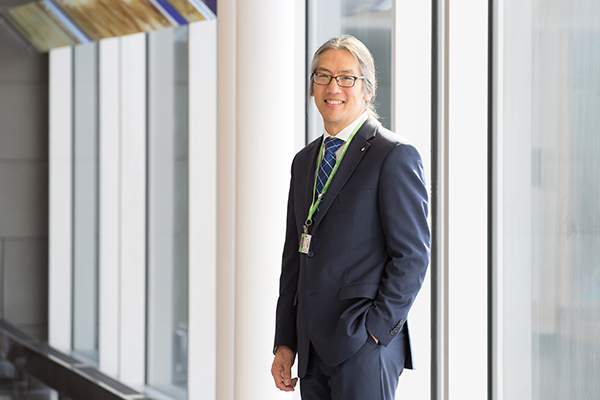 January 29, 2018
IBBME Professor Tom Chau has been awarded the Order of Ontario for his contributions to the province in the field of paediatric rehabilitation engineering. (Photo: Christina Gapic/Holland Bloorview Kids Rehabilitation Hospital)
Human Health

Professor Tom Chau (IBBME) has been awarded the Order of Ontario, the province’s highest honour. Created in 1986, appointees are selected based on excellence in all fields of endeavours and backgrounds, whose contributions have left a lasting legacy in Ontario.

Chau has dedicated nearly two decades of his career to creating unique communication tools and technologies for children with complex disabilities. As a biomedical engineer, Chau’s research is grounded in treating communication as a fundamental human right and develops innovations that adapt to a person’s unique abilities and needs.

“Tom’s extraordinary dedication to paediatric rehabilitation has helped improve the lives of many children and their loved ones, and he has also inspired a number of students to pursue this important work,” said Professor Warren Chan, director of the Institute of Biomaterials & Biomedical Engineering (IBBME) at the University of Toronto. “Congratulations — this recognition is well deserved.”

Chau holds appointments as a U of T professor in IBBME and as the vice-president of research at the Holland Bloorview Kids Rehabilitation Hospital. He leads a world-renowned research group that has published more than 190 journal articles and holds more than a dozen patents. He has also supervised over 250 undergraduate and graduate students.

Among his many accomplishments, Chau is well known for the creation of the Hummer—a device that converts vocal cord vibrations (such as a hum) into digital signals for children with speech-related disabilities to communicate via a smartphone interface, and the Virtual Music Instrument (VMI)—a therapy technology used in over seven countries worldwide that allows kids with disabilities to play music without having to hold or manipulate an instrument. Chau and his team were awarded the Governor General Meritorious Service Decoration in December 2017 for the VMI.

From 2004-2014, Chau held the Canada Research Chair in Paediatric Rehabilitation Engineering.  He has received over 31 international, national and local awards for the impact of his research and leadership. In 2011, he was named by the Globe & Mail as one of 25 Transformational Canadians.

The Honourable Elizabeth Dowdeswell, Lieutenant Governor of Ontario will bestow the honour to the newest appointees during an investiture ceremony at Queen’s Park on February 27, 2018.