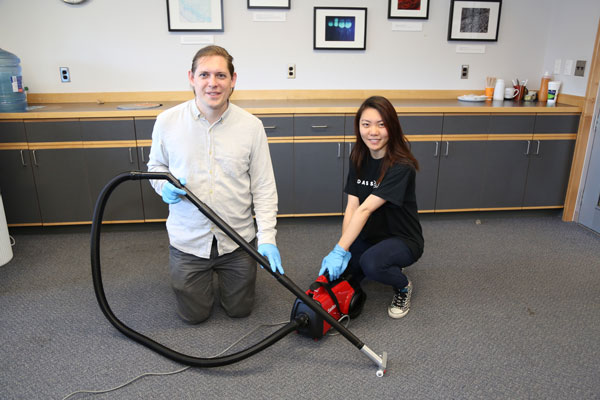 This summer, postdoctoral researcher Lukas Kohl (ChemE) and undergraduate student Cynthia Jing (Year 2 EngSci) will be vacuuming strangers’ homes in northern Alberta. But they’re not necessarily there to clean — they are looking for evidence of long-term human health impacts arising from last summer’s devastating wildfire.

That fire, which raged through northern Alberta one year ago, is already estimated to be the most costly natural disaster in Canada’s history, destroying approximately 2,400 homes and forcing the evacuation of nearly 90,000 people. But according to Professor Arthur Chan (ChemE), the principal investigator on the project, the ash left behind by the fire can continue to affect people’s health long after the flames have gone out.

“Smoke and ash can contain a large number of different compounds, including organic compounds, heavy metals, black carbon and more,” says Chan. “Some of these are suspected to be carcinogens, or are linked to other negative health outcomes.”

Chan and his team use advanced analytical chemistry techniques to tease apart all the different components of the complex chemical mixtures, including fire ash. They can detect everything from heavy metals such as lead, a potential neurotoxin, to organic chemicals such as polycyclic aromatic hydrocarbons (PAHs), which have been associated with cancer.

In their current project — dubbed Fire Ash Characterization and Evaluation of Toxicity (FACET) — the team plans to collect house dust from dwellings in Fort McMurray, Alta. and other communities affected by the wildfire. While much of the outdoor ash has been either shipped away from town or immobilized by spraying it with a glue-like substance known as tackifier, ash that has found its way into homes is a different story.

“This is the ash that is closest to people’s bodies, and because we spend most of our time indoors, it would have the biggest impact on people’s health,” says Kohl. “Indoor pollution is not well understood, so in a way this is a new perspective on forest fires.”

Kohl and Jing will use a modified vacuum cleaner that collects dust in two small vials in the head of the device, before it has reached the mechanical components. They can also take samples by wiping surfaces with a wet, disposable cloth.

“We want to make sure we sample a variety of locations within the house,” says Kohl. “For example, we want to have one space that people clean often, like a living room, and one space that is not frequented, like an attic, where it is most likely we will find old dust that contains a lot of fire ashes.”

Initially, the team was concerned about the challenge of arranging house visits. “When we’re sitting in Toronto, and it can be hard to reach out to people who live hundreds of kilometres away,” says Kohl. But the response so far has been very positive.

“We have reached out to Facebook groups used by people in Fort McMurray, as well as local media,” says Jing. “Within two days, we already had more than 60 interested people contacting us about the study.”

For each home, the team plans to make three visits — one in the summer, one in the fall and one in the winter ­— in order to minimize anomalies and compare any changes in hazard levels over time.

“Of course, our hope is that we won’t find anything,” says Chan. “But if we do, we can inform people of their risk, and suggest adjustments to their cleaning habits. We want to understand the impacts before people start to suffer from them, and provide guidelines to minimize exposure.”

If you live near Fort McMurray and would like to find out more about the study, please visit http://uoft.me/facet or check out the Facebook page.

To sign up to have your home sampled, fill out the team’s Google form or send an email to lukas.kohl@utoronto.ca