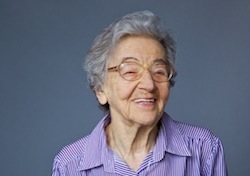 U of T Engineering Professor Emerita Ursula Franklin, a world-renown materials scientist, peace advocate and humanitarian, has been inducted into the Canadian Science and Engineering Hall of Fame. John A.D. McCurdy (1886-1961), who graduated from U of T Engineering in 1906, was posthumously inducted.

The Hall of Fame, part of the Canadian Science and Technology Museum in Ottawa, honours individuals whose outstanding scientific or technological achievements have had long-term implications for Canadians. There are only 54 members, including notables such as Alexander Graham Bell, Frederick Banting and Sandford Fleming.

Professor Franklin joined U of T Engineering as the first female professor of metallurgy and materials science (now known as materials science and engineering). In 1984, she became the first woman to receive the title “University Professor,” the highest academic rank at the University of Toronto, in recognition of her service to U of T and the community at large. Among her many other accomplishments, Professor Franklin is known for her investigation into the presence of strontium-90 in children’s teeth, which ultimately led to the ban of atmospheric nuclear weapons testing in the 1960s. Professor Franklin is the author of The Real World of Technology and The Ursula Franklin Reader: Pacifism as a Map, and other works. She is a Companion of the Order of Canada and a Fellow of the Royal Society of Canada.

McCurdy began his studies in mechanical engineering at the University of Toronto at the age of 16 and graduated in 1906. In 1909, he made aviation history when he piloted the first Canadian-designed aircraft ever flown – the Silver Dart – off the ice of Lake Bras d’Or in Nova Scotia. In 1910, he became the first Canadian to be issued a pilot’s licence and made the first flight from Florida to Cuba in the following year. McCurdy served as Lieutenant Governor of Nova Scotia from 1947-1952 and received an Honorary Air Commodore rank from the Queen in 1959. He continued to be active in Canadian aviation until his death in 1961.

The induction took place on November 21 at the museum in Ottawa.