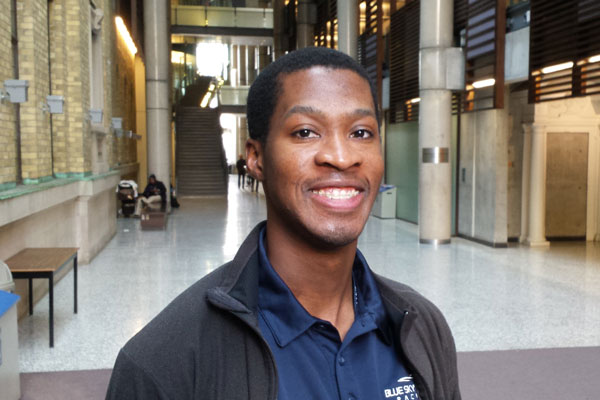 Brown is the first student from a Canadian university to win the international design challenge, which comes with a $500 prize. The prestigious competition is one of the key ways in which budding aircraft designers can demonstrate their abilities.

Brown has been interested in aerospace since childhood. “I started building model aircraft out of balsa wood when I was eight or nine,” he says. “In CEGEP [junior college], I won the science fair with a model glider project.”

He first found out about the AIAA competition in a textbook on aircraft design he was reading. “I just came home from the 2014 Canadian International Air Show and saw that the RFP [request for proposals] had been posted,” he says. “I just felt like it was something that I had to do.”

The project, which took several months to complete, involved designing an unmanned aircraft that could fly supersonically for 1,000 nautical miles or more, drop a payload of 4,000 pounds and then return to base. “The requirement for a long supersonic flight has such a strong impact on the design,” explains Brown, who was supervised by Professor Peter Grant (UTIAS). “You have to sweep the wings very far back and have these ridiculously huge engines. It really drove everything else.”

Brown has already started work on next year’s competition, which involves designing a cargo and personnel carrier aircraft. The project will form his undergraduate thesis in Engineering Science.

“Arthur’s success in the AIAA Foundation Aircraft Design Competition is very impressive,” said Professor Mark Kortschot, chair of the Division of Engineering Science. “He showed both creativity and analytical rigour in designing an aircraft that had to satisfy a challenging set of requirements, and I am really pleased that Engineering Science has created a learning environment where talented students like Arthur can flourish.”