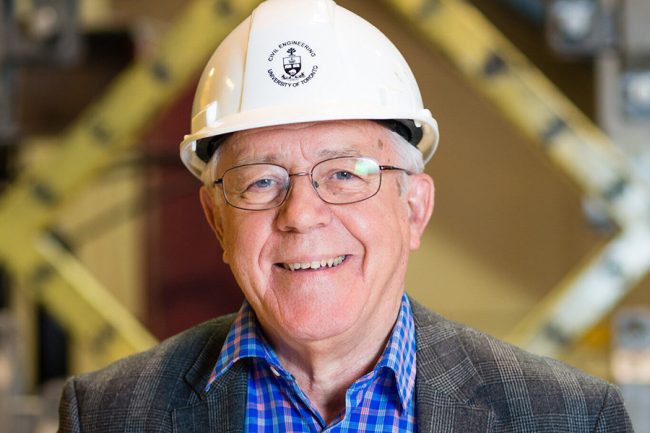 University Professor Emeritus Michael Patrick Collins (CivMin) has been named a Member of the Order of Canada.

The announcement was made by Governor General Mary Simon on December 29, 2021. Collins is among 135 new appointments and promotions to the Order, including more than two dozen members of the University of Toronto community.

Collins was honoured for his seminal work as an internationally renowned structural engineer who has focused on the behaviour of concrete subjected to shear force. His research has led to improved design techniques for a wide variety of structures.

Collins is best known for his contributions to the understanding of the nonlinear behaviour of reinforced and prestressed concrete structures. These include buildings, bridges, concrete offshore oil platforms, nuclear containment structures and other heavy industrial facilities.

His Modified Compression Field Theory, based on novel experimental techniques, has transformed the shear design of concrete structures from restrictive empirical procedures to rigorous, general, easy-to-follow models and has been used as the basis for widely-used computer programs such as Response-2000. His theories have been incorporated into design specifications all over the world.

“In addition to his profound research contributions, Professor Collins’ legacy includes the many undergraduate and graduate students he guided over the years, who are now having their own powerful impact on civil engineering and many other fields,” says U of T Engineering Dean Chris Yip. “On behalf of the Faculty, my warmest congratulations on this well-deserved honour.”

The current list of inductees also includes Professor Peter Zandstra, who was for many years a faculty member in the Institute of Biomedical Engineering, and retains a status-only appointment in the Department of Chemical Engineering & Applied Chemistry.

During his time at U of T, Zandstra played a key role in the creation of the Bioengineering minor, which enables undergraduate students to specialize in topics such as environmental microbiology, tissue engineering, biomedical imaging, and nanotechnology as related to medicine and the environment.

Zandstra was one of the first U of T Engineering faculty members to join the Donnelly Centre for Cellular & Biomolecular Research upon its creation in 2005. He was also the founding Executive Director of Medicine By Design, which harnesses the extraordinary expertise at the University of Toronto and its affiliated hospitals to undertake transformative research in regenerative medicine and cell therapy, power Toronto’s bioscience sector and strengthen Canada as a global leader in the field.

Though now a professor at the University of British Columbia, Zandstra remains the Chief Scientific Officer of CCRM, a global, public-private partnership headquartered in Canada which supports the development of regenerative medicines and associated enabling technologies, with a specific focus on cell and gene therapy.