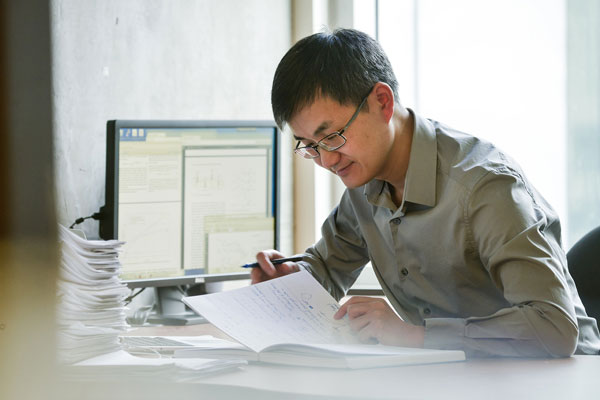 Wei Yu elected to the Royal Society of Canada’s College of New Scholars, Artists and Scientists

September 12, 2017
Professor Wei Yu (ECE) has been named to the Royal Society of Canada’s College of New Scholars, Artists and Scientists. (Photo: NSERC)

Professor Wei Yu of The Edward S. Rogers Sr. Department of Electrical & Computer Engineering (ECE) is the latest U of T Engineering faculty member to be named to the Royal Society of Canada’s College of New Scholars, Artists and Scientists.

Established in 2014, the College is Canada’s first national system of multidisciplinary recognition for the emerging generation of Canadian intellectual leadership. Its mandate is to gather scholars, artists and scientists at a highly productive stage of their careers into a single collegium for the benefit of society. New members of the College will be inducted at the Society’s Celebration of Excellence in Winnipeg, Manitoba on November 24, 2017

“Professor Wei Yu is a truly exceptional researcher and engineer whose contributions will have a lasting impact on his field, on industry, and on society”, said Dean Cristina Amon. “I am delighted that he has been recognized as one of Canada’s most prominent young scholars.”

Watch this video to learn more about Professor Yu and his research into next-generation Internet technologies.

Professor Yu, the Canada Research Chair in Information Theory and Wireless Communications, is internationally recognized for his wide-ranging and influential contributions to the fields of information theory and communication engineering. His research program is driven by the unprecedented growth in demand for reliable, high-capacity broadband technologies for internet access. Yu has made significant contributions to the design of both wireline communication systems and wireless cellular networks, which power today’s high-speed data access for smart phones, tablets and laptops. His work is characterized by his ability to translate information theory, which is the mathematical foundation for digital communications, into practical applications. The impact of his work on wireless and wireline communications has already been extraordinary.

Wei Yu is co-inventor on 14 patents and co-author of over 180 technical papers. In 2015, he was recognized by the Natural Sciences and Engineering Research Council of Canada (NSERC) with an E.W.R. Steacie Fellowship, awarded to only six outstanding early-career researchers each year. In 2014 he was elected fellow of the Institute of Electrical and Electronics Engineers “for contributions to optimization techniques for multiple-input multiple-output communications”.  Yu was named a “Highly Cited Researcher” in Computer Science by Thomson Reuters and Clarivate Analytics in 2014, 2015, and 2016.