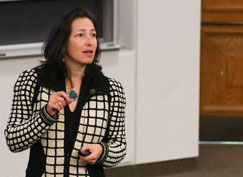 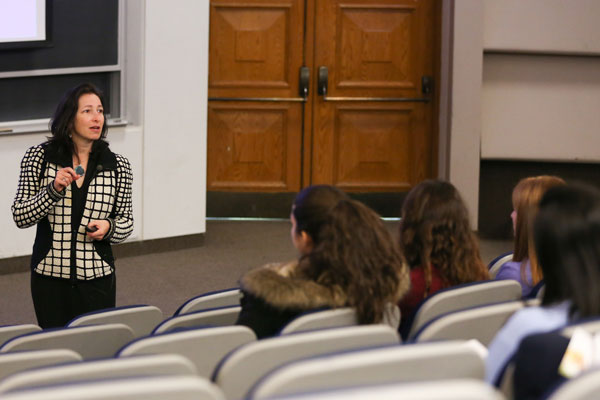 A select group of high-achieving high school science students had the opportunity to spend their morning last Saturday with one of the world’s leading experts in biomedical engineering.

More than 70 top students from schools across the Toronto area gathered at the Faculty’s Young Women in Engineering Symposium (YWIES). The event began with a keynote address by Professor Molly Shoichet (IBBME, ChemE), who shared first-hand how she became a researcher, her cutting-edge work at the interface of engineering and medicine — and why she hopes they, too, will pursue a career in engineering.

“People ask me, ‘Why do you care if women go into science?’” said Shoichet, a University Professor and part of the University of Toronto’s groundbreaking Medicine by Design program. “The reason I care is that we are trying to solve some really big problems, and we cannot rely on just half the population to do that. That’s why it’s really important for women to come into this field — because women are going to bring a different approach, different creativity and different ideas.”

Now in its second year, YWIES is part of the Faculty’s strategy to recruit top female students to its undergraduate programs. In 2014–2015, nearly one-third of first-year U of T Engineering students were women, the highest proportion of any entering engineering class in Canada. The Faculty is building on this achievement through events such as YWIES, as well as Girls Leadership in Engineering Experience (GLEE), a weekend in the spring for female high school students who have been offered admission to U of T Engineering, and pre-university outreach programs such as Girls Jr. Deep.

“YWIES is a great opportunity to connect with top female science students,” said Michelle Beaton, associate director of the Engineering Student Recruitment & Retention Office. “Our hope is to inspire them and to make U of T Engineering their first choice.”

The grade 12 students spent a packed day participating in workshops on subjects ranging from sustainable energy to engineering design, learning about U of T Engineering programs, touring the Faculty and mingling over lunch with members of the University of Toronto chapter of Women in Science and Engineering (WISE).

They also had a chance to hear from undergraduate students and WISE members from all program areas about why they picked U of T Engineering, their experiences transitioning from high school to university and the limitless career possibilities an engineering degree offers.

Danielle Lewis from Sinclair Secondary School in Whitby, Ont., said hearing about Shoichet’s research into stem cells and spinal cord regeneration was a highlight of the day because it gave her a new perspective on biology, a subject she loves. “I think it was interesting that it’s classified as engineering because that’s not typically what I thought engineering is,” she said.

Amy Thachil, a student at Northern Secondary School in Toronto, said she is interested in engineering because it uses science to create something new. She said she attended YWIES because she “want[s] to really understand what it takes to be an engineer.”

Shoichet described life as “a team sport” and credited her family and strong mentors for encouraging and supporting her career. She also told the students to do what they love.

“I’m always about keeping as many doors open as possible,” Shoichet said. “I really do encourage you to pursue your passions and pursue what you’re good at.”