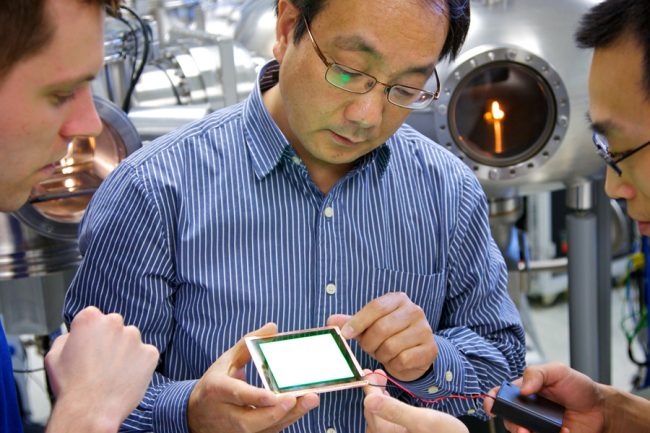 September 10, 2019
Zheng-Hong Lu, seen here with former graduate students Michael Helander (left) and Zhibin Wang (right) is one of two U of T Engineering professors to be inducted as Fellows of the Royal Society of Canada this year. (Photo: Mark Balson)

U of T Engineering professors Zheng-Hong Lu (MSE) and Yu Sun (MIE) have been elected fellows of the Royal Society of Canada (RSC) on the basis of their exceptional contributions to scholarship in their fields.

“On behalf of the Faculty, my warmest congratulations to both Professor Lu and Professor Sun on this well-deserved honour,” said U of T Engineering Dean Christopher Yip. “From next-generation screens and displays to robotic technology that can potentially advance the study of human diseases, they embody our commitment to engineering a better world.”

Zheng-Hong Lu holds the Canada Research Chair in Organic Optoelectronics, and is conducting pioneering research on organic light-emitting diodes (OLEDs). In recent years, these materials have been widely adopted by manufacturers of display screens for televisions, computers, and smartphones due their ability to provide thinner, more flexible screens with lower energy needs.

Lu’s research has contributed significantly to the development of new OLEDs, including varieties which offer better energy efficiency and which are more cost-effective to manufacture than their predecessors.

Lu is co-founder of two spin-off companies, OTI Lumionics and Norel Optronics, and works with leading companies in the display and lighting sectors to commercialize the technology developed in his lab. He is a fellow of the American Association for the Advancement of Science (AAAS) and the Canadian Academy of Engineering (CAE).

Yu Sun is the Canada Research Chair in Micro- and Nano-Engineering Systems and the Director of U of T’s Robotics Institute. He is an international leader in developing robotic systems and devices for manipulating and characterizing cells, molecules, and nanomaterials. Sun pioneered the field of robotic cell manipulation, and his work has led to breakthroughs in clinical cell surgery, disease diagnostics, and drug screening. He has also contributed significantly to advances in cellular mechanobiology and nanomechanics through the development of micro-nano instrumentation technologies.

Recently, Sun and his team developed a robotic magnetic tweezer system capable of 3D navigation inside a cell, allowing scientists to directly explore intercellular structures for the first time. Sun is a fellow of the AAAS, CAE, the American Society of Mechanical Engineers, the Canadian Society for Mechanical Engineering, the Institute of Electrical and Electronics Engineers, and the National Academy of Inventors.

The Royal Society of Canada’s mission is to recognize scholarly, research and artistic excellence, to advise governments and organizations, and to promote a culture of knowledge and innovation in Canada. Fellowship in the RSC is one of the highest honours a Canadian researcher can achieve. New fellows will be inducted in Ottawa on November 22, during the Society’s Celebration of Excellence and Engagement. 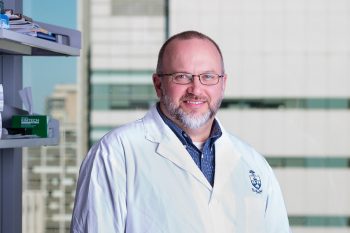