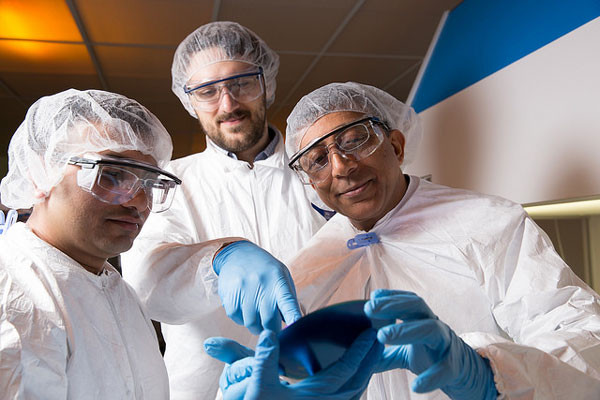 June 27, 2016
Nazir Kherani (at right) is just one of the six U of T Engineering professors and five alumni inducted into the Canadian Academy of Engineering today. (Photo: Jacklyn Atlas)

Eleven members of the U of T Engineering community have been inducted as fellows of the Canadian Academy of Engineering (CAE). Professors Nazir Kherani (ECE, MSE), Deepa Kundur (ECE), Milica Radisic (IBBME, ChemE), Murray Thomson (MIE) and Honghi Tran (ChemE), along with adjunct professor Sankar das Gupta (MSE) and alumni William Breukelman (ChemE 5T5), Elizabeth Croft (PhD MechE 9T5), Samantha Espley (GEO 8T8), John Gruzleski (PhD MMS 6T8) and George Kipouros (MASc MMS 7T7, PhD 8T2), are among the CAE’s 43 new fellows. The CAE comprises the country’s most accomplished engineers, who have demonstrated their dedication to the application of science and engineering principles in the interests of Canada. The new CAE Fellows were inducted on June 27 in Winnipeg, as part of the Academy’s Annual Meeting.

“The induction of these outstanding Engineering alumni and faculty members to the Academy is a testament to the respect in which they are held by their peers and the impact of their accomplishments as engineering innovators, researchers, educators and industry leaders,” said Dean Cristina Amon. “On behalf of the Faculty, I congratulate the inductees on this prestigious and richly deserved recognition.”

Nazir Kherani has made sustained contributions in the field of energy vis-à-vis industry and academia over a period of approximately 30 years. He is an internationally recognized expert in tritium science and technology and a leading figure in solar photovoltaics research and development. He has contributed extensively to the development of the solar industry in Canada, inspiring young entrants to the field and shaping the area’s scientific direction. Kherani’s contributions have been acknowledged through a series of awards, including the Ontario Early Researcher Award, the Ontario Research Foundation Research Excellence Award and the Ontario Professional Engineers Engineering Medal in Research and Development.

Deepa Kundur is conducting path-breaking engineering research at the interface of information processing and cyber security, creating key technologies for security of digital media and ‘smart’ infrastructure. She has introduced paradigm-shifting approaches for ensuring copy protection and tamper-proofing of digital media, such as the Nonnegativity and Supports Constraints Recursive Filtering algorithm. Kundur is a leading authority on vulnerabilities in smart-grid infrastructure systems. She is regularly invited to participate in invitation-only task forces and meetings related to cyber security for critical infrastructure and has chaired international conferences and workshops in this area. Professor Kundur is a fellow of IEEE.

Milica Radisic is an international leader in the field of cardiovascular tissue engineering. She has pioneered the technique of electrical field stimulation for cultivation of functional heart tissue in the laboratory, leading to innovative new approaches to testing drugs in vitro on arrays of human tissues. Radisic’s groundbreaking research on the design and development of bioreactors for cardiac tissue engineering based on stem cell derived cardiomyocytes and biomaterials has led to accolades such as the NSERC E.W.R. Steacie Fellowship, the Engineers Canada Young Engineer Award, induction into the Royal Society of Canada’s College of New Scholars, Artists and Scientists, and inclusion as one of MIT Technology Review’s Top 35 Innovators under 35.

Murray Thomson is an internationally renowned researcher in the areas of alternative fuels, pollution control and combustion sensors. He has contributed significantly to the advancement of knowledge in these fields and several Canadian companies have benefited from his research. Among his many accomplishments, he has developed four patented industrial sensors that allow reductions in energy consumption and emissions through better monitoring. Thomson has also made extensive contributions to his professional community: he is director of the NSERC CREATE Program in Clean Combustion Engines and vice-chair of the Canadian Section of the Combustion Institute. He is a fellow of the Canadian Society for Mechanical Engineering and the Engineering Institute of Canada.

Honghi Tran’s contributions to the pulp and paper industry over the past three decades have been truly extraordinary. They include patented research advances which have saved the industry hundreds of millions of dollars, leadership of 10 highly successful industrial consortia based at U of T and involving more than 50 companies around the world, supervision of more than 80 graduate students, and many leadership positions in his professional community, including inaugural chair of the Council of Directors for the Canadian Pulp and Paper Network for Innovation in Education and Research (PAPIER). Tran has won almost every major award given out by the pulp and paper industry, including the Pulp and Paper Technical Association of Canada’s John S. Bates Gold Medal.

Dr. Das Gupta has pioneered numerous innovations, including an electrochemical reactor for industrial water pollution abatement & recycling, furnaces for experiments in space, ceramic glow plugs that reduce diesel engine emissions, and a unique non-toxic process for manufacturing the world’s most powerful lithium ion batteries with wide application in the marine, automotive and energy storage sectors. He developed the first Lithium Ion powered electric cars in North America and in Europe. The CEO & co-founder of Electrovaya Inc., Dr. Das Gupta has over 100 publications and over 50 US patents. An Adjunct Professor in MSE, he has facilitated knowledge exchange between industry and academia and is an excellent mentor for young engineers.

William (Bill) Breukelman is a successful entrepreneur and engineer with more than 50 years of Canadian and international leadership experience. The companies he has led have significantly advanced the fields of imaging, analytical geochemistry, and geophysics. Breukelman was a co-founder and chair of IMAX Corporation, co-founder and president of Sciex Ltd. and president of Fischer & Porter Company. He is chair and principal of Business Arts Inc. and founder and director of several cutting-edge imaging ventures. Breukelman was appointed an Officer of the Order of Canada and received the Queen Elizabeth II Diamond Jubilee Medal, recognizing his long-term entrepreneurial service and achievements in Canada and globally.

Elizabeth Croft is an international leader in recruiting women into engineering. As the NSERC Chair for Women in Science and Engineering and as associate dean of engineering at UBC, Croft was a driving force in nearly doubling the number of women in engineering at UBC. She is also an internationally respected researcher in the field of robotics, particularly robot trajectory planning and human-robot interaction. She has written over 150 scholarly articles on these subjects. Croft’s service and research excellence have been recognized through major provincial, national and international awards. She is a fellow of the American Society of Mechanical Engineers and Engineers Canada and was named one of the Top 100 Most Powerful Women in Canada in 2014.

Samantha Espley is a trailblazer for women in the mining industry. Currently General Manager of Mines and Mills Technical Services for Vale’s Ontario Operations, she is the first woman to hold this role, and was the first woman appointed to many of the senior technical and management positions she has held throughout her career. Espley has authored and presented several papers on advancing women in engineering and worked within the industry to increase diversity. She is a former president of Women in Science and Engineering Sudbury and has held leadership roles in many other engineering organizations. She received the 2015 Engineers Canada Award for the Support of Women in the Engineering Profession and was named one of 100 Global Inspirational Women in Mining in 2013.

John Gruzleski’s contributions to the field of metallurgy include work on oxidation, inclusion formation, and hydrogen effects on alloy behaviour. His pioneering studies on the microstructural influence of strontium helped make this element the foundry industry’s most widely used structural modifier. His collaboration with Timminico Metals helped this Canadian company become the world’s largest producer of strontium. Gruzleski is a former dean of engineering at McGill University and director of engineering at University of Guelph. He has given exemplary service to professional societies, serving on journal editorial boards and promoting university-industry collaboration. The recipient of many international awards, he has authored more than 150 papers and three books.

George Kipouros has made significant contributions to the fundamental aspects and practical applications associated with metals processing. While with Transgear Manufacturing, his research led to the production of refractory metal coatings for tool steels. As founding chair of the Canadian Metallurgy/Materials Education Council, he has championed international collaborations between industry and academia, serving as technical advisor to NATO’s Science for Peace program ”Electrochemical Production of Mg-Nd Alloys.” He has presented courses for industrial personnel, authored more than 170 publications, and has supervised more than 50 researchers. He is dean of engineering at the University of Saskatchewan and recipient of several international awards.