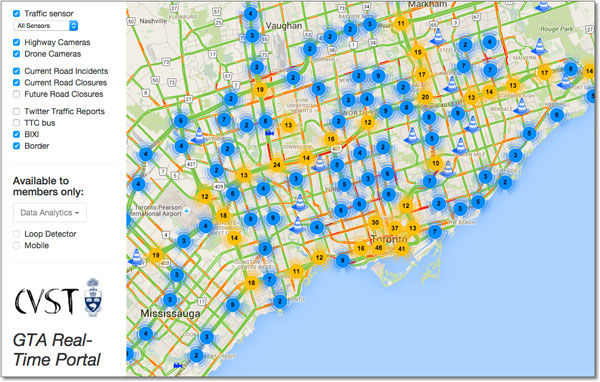 This story is Part 6 of a seven-part series, U of T Engineering in the City, running throughout fall 2015.

Last Friday, an unmanned octocopter lifted off from a grassy park in a Toronto ravine. It ascended 75 metres and then twisted its mounted camera to scan the volume of traffic moving along Don Mills Road. With a live high-definition video feed transmitted through a ground station to a new online tool designed by U of T engineers, this simple demonstration is part of an ambitious plan to improve traffic monitoring and management through open data.

Called the Connected Vehicles and Smart Transportation (CVST) portal and headed by Professor Alberto Leon-Garcia (ECE), this plan aims to bring harmony to how we monitor and manage traffic by integrating existing traffic monitoring data, using new technologies to address the gaps and generating insights that can inform decision making. Collaborators include the University of Toronto Transportation Research Institute (UTTRI) and Professor Hugh Liu (UTIAS), an expert on unmanned aerial vehicles (UAVs), also known as drones.

“The problem of coordinating traffic is complicated by the fact that there are multiple public and private organizations generating data, and they aren’t necessarily sharing it with each other,” says Leon-Garcia. CVST overcomes this problem by incorporating data from multiple sources — smart phones (Google Maps, Twitter), TTC buses, BIXI bicycles, border crossings and much more.

Although it pulls all these data sources together, CVST is more than simply an aggregator of new and existing information. It also incorporates an analytics layer, which uses machine learning and other techniques to translate data into useful information. Crucially, these outputs are made available via an open application program interface (API). This allows anyone from curious citizens to city planners to app developers to leverage the system in order to meet their own needs.

The idea behind using drones is to address gaps in the data. “Right now we rely on areas where cameras or other sensors exist,” says Dr. Ali Tizghadam (ECE), a senior research associate in Leon-Garcia’s lab. Yet it’s easy to imagine a major accident occurring at a location that isn’t covered by cameras, or an event such as an ice storm that disables the existing sensors. “What we want to move toward is a system of sensors on demand,” says Tizghadam. Drones can be deployed quickly and programmed to scan any area of interest.

Tizghadam emphasizes that all data integrated into the portal is first stripped of any identifying information, in accordance with strict regulations. “For many sources, such as data from mobile phones, the data we receive is already anonymized,” he says. “For some new sources, we will have to do it ourselves, and that’s another research direction for us.”

The portal is currently available on the web as an interactive map with additional layers showing each type of information. Coloured pylons indicate road closures and construction work, while moving red TTC icons show the real-time locations of buses. Clicking on other icons allows the user to quickly access historical data from traffic cameras or loop detectors.

The platform is also designed to anticipate future technologies. For example, connected and autonomous vehicles — that is, self-driving cars — should be able to tap into the system and determine the best route to take. Such vehicles are particularly interesting to Leon-Garcia, as they intersect with another complex system he has spent time modelling, which is the power grid.

“Where I’m headed is what I call a Smart City platform,” he says. “It’s about gathering data, understanding usage patterns, creating intelligence and leveraging that to modulate the flow of traffic in the city and to lead to efficient and sustainable use of resources.”