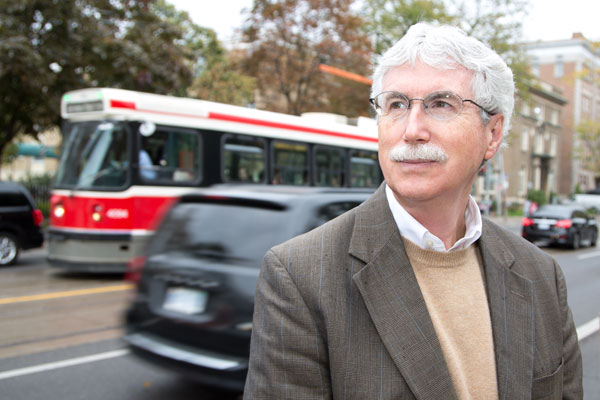 January 20, 2016
“The more capacity you can build in the downtown, the better off everyone is, including U of T,” says Eric Miller (photo by Roberta Baker)

This post originally appeared on U of T News.

Some future U of T students might find it a little less crowded getting to the downtown Toronto campus by subway if Mayor John Tory’s SmartTrack transit plan is implemented.

Tory asked Professor Eric Miller (CivE), head of U of T’s Transportation Research Institute, to analyze the ridership potential of his plan which would provide service from the Airport Corporate Centre in the west, southeast to Union Station and northeast to Markham in the east.

It would have 22 new stations and five interchanges with the TTC. The line would be built in seven years, with service starting after 2021.

The report was released at City Hall on Jan. 19. (Read the Toronto Star’s coverage of the report.)

Miller told U of T News afterward that while the report doesn’t specifically look at travel to and from the downtown campus “given where U of T is located I think the major impact would be to the extent that it does seem to offer some relief to the Yonge subway line.

“SmartTrack would free up some space and provide some capacity for people on Yonge St., so that could be good news for students coming from the north [of Bloor].”

Coming in from the east or west, though, would mean going to Union Station and backtracking to the St. George campus.

“Anything that improves service into the downtown area is probably helpful for U of T,” though it is not the primary focus of who would benefit from SmartTrack, he said.

After the report was released, Tory, a U of T alumnus, told reporters that using TTC fares and frequent service (five minute headways) SmartTrack could attract “more than 300,000 daily riders, which is more than the daily ridership of the entire GO system.”

In general, Miller said, “the more capacity you can build in the downtown, the better off everyone is, including U of T.”

But he added that “no one line is going to be a huge benefit to everybody,” noting that the institute, part of the Department of Civil Engineering in U of T’s Faculty of Applied Science & Engineering, is also studying the impact of a proposed downtown relief line. That report will be made public in a few weeks.

Miller’s report looked at potential ridership in 2031 and 2041, and Tory’s boast about adding more than 300,000 riders is based on using TTC fares and a five-minute headway for trains.  “It would attract huge ridership if those things happen, but there are still a lot of technical questions to be addressed,” Miller said.

“Until you have the cost side of the equation you can’t declare victory,” Miller said.  “At some point you might not be able to run five-minute headways for technical reasons, or it will cost you multi-millions of dollars to do it.

“There are many miles to go on this one.”

Another report done by City planning staff suggested that the heavy rail portion of SmartTrack, from the Mount Dennis neighbourhood, centred at Eglinton Ave W. and Jane St. west to the Mississauga Airport Corporate Centre, would be too costly and disruptive to neighbourhoods.

Tory agreed and suggested light rail would be more efficient and cheaper. The plan “won’t exactly be the same concept we discussed during the (election) campaign,” but it remains “bold and transformative.”