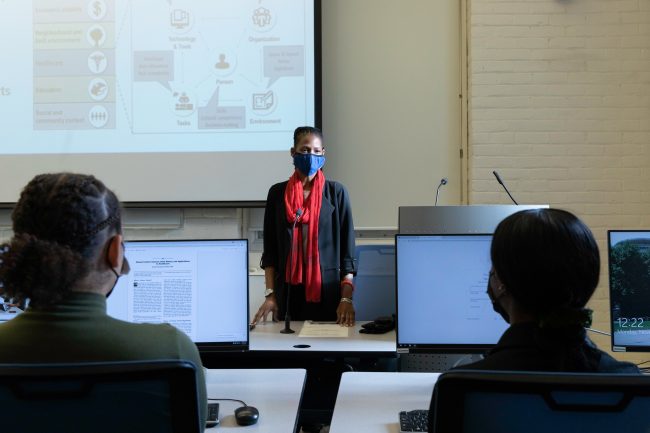 Attracting top talent: How one U of T Engineering search committee redesigned its hiring process

When the opportunity arose to hire a new assistant professor at U of T Engineering’s Department of Mechanical & Industrial Engineering, the search committee didn’t want to follow the same old formula.

“Attracting a diverse pool of applicants was very important for us,” says Professor Greg Jamieson (MIE), who co-chaired the hiring committee alongside Professor Birsen Donmez (MIE). “We’ve seen the tremendous value in embracing a diversity of perspectives in the field of engineering, especially when the voices of underrepresented groups are amplified. The impact is remarkable.”

To increase equity in their search, the hiring team explored a number of approaches, such as undertaking inclusivity training and working to increase representation on the hiring panel. As a result of these changes and others, they ended up fundamentally re-thinking their typical search process — with outstanding results.

Before launching the search, Professor Markus Bussmann, Chair of the Department of Mechanical & Industrial Engineering at the time, encouraged the search committee to join the Inclusive Practices in Recruitment workshop run by U of T’s Toronto Initiative for Diversity & Excellence (TIDE). The team signed up, and Jamieson hoped that it would go beyond the implicit bias training he had already completed.

This training session provided a set of concrete strategies, recommended processes and templates that became the framework for the committee’s recruitment efforts.

“It was great because we came out with actionable ideas,” says Jamieson. “Our entire search was informed by the learnings from that TIDE workshop.”

The workshop — run by TIDE co-chairs Professors Maydianne Andrade (Biology) and Bryan Gaensler (Astronomy and Astrophysics) — is one of several offered by the TIDE team, a group of professors from across U of T who volunteer their time through talks, training sessions and sharing of resources in support of equity, diversity and inclusion (EDI).

“I think that a failure of a lot of equity training is that you get people sitting there with their arms crossed thinking, ‘Good for them for presenting this, but this just doesn’t reflect how my unit works and the presenters clearly don’t understand our culture,’” says Gaensler. “We wanted to get away from that.”

“Each of our presentations includes data that contextualizes the training for that particular unit attending the workshop, to show what representation actually looks like, what promotion looks like, who’s graduating in that field — if we have the data for it — and then what Canada looks like,” says Andrade.

“Then we talk about some of the often unintentional or unconscious processes that may be subverting some of the formal ways in which we apply policy if we’re not actually considering how bias might play into it.”

Participants analyze their approach to hiring, from writing the job ad, to raising awareness of the position, all the way through to the interview and making the offer. The training covers practical tips backed by research, such as comparing all candidates against a set of fixed criteria and not against each other, as well as reading reference letters last to minimize bias.

“The message is about levelling the playing field and never about hiring for diversity quotas,” says Gaensler.

The hiring team wanted to invite an alumnus to join the search committee, both to increase diversity and representation, and deepen expertise on the panel. Jamieson reached out to Herman Colquhoun (IndE MASc 0T0), Design Principal at IBM, who is one of the leaders of the Racial Equity in Design initiative at the company and is also the co-chair of the IBM Canada Black Experience.

Colquhoun brought evidence-based recommendations, including integrating wording from U of T’s Diversity Statement all through the posting, and challenging the hiring panel to set a goal of shortlisting at least two candidates from racialized groups and two women.

“Research shows that if a hiring pool has only one underrepresented person, then the chance of hiring that person is almost zero,” he says. “However, if an effort is made to bring in at least two or more underrepresented people, the probability of hiring from the group grows significantly.”

The hiring team cast a wide net to encourage candidates from beyond their professional networks and industry associations. This included leveraging Colquhoun’s network within the Historically Black Colleges and Universities (HBCU) in the U.S., to expand their outreach.

“We were very explicit in asking ourselves, ‘How are people going to find out about this role?’ and this shift to active promotion — along with all our other efforts — contributed to our amazing results,” says Jamieson.

“We exceeded our goals and were blown away by the calibre of the applicants that made the shortlist. In the end, we found a way to extend offers for two professorial positions instead of one, because we just couldn’t part with either of the exceptional finalists.”

Alfred says she noticed the search committee’s emphasis on EDI throughout the hiring process and credits this attention to inclusivity for influencing her decision to join U of T Engineering.

“I remember telling the hiring committee that I would push to attract and recruit more underrepresented students to join my research lab,” she says. “And the department chair immediately responded, ‘That’s great! Let me know how we can help you.’ That unhesitant reply and support was so important to me.”

Jamieson is looking forward to the deep experience and research expertise that the two new professors bring to the human factors engineering program.

“It was very gratifying to achieve these results in our search, and to then go back to Professor Andrade and Professor Gaensler to say, ‘It really worked!’ The TIDE workshop was probably one of the most effective training sessions in my 20 years as an academic.”